ECF and the New European Bauhaus: The Spirit of Renewal Back

ECF and the New European Bauhaus: The Spirit of Renewal

Max Möglich concluded his internship at the European Cultural Foundation with an article. In it he presents his answers on the question how our various European programmes could relate to the European Commission call for a New European Bauhaus. The views presented in the text are thus his personal.

Why does Europe need a new Bauhaus?
Because faced with Euroscepticism, climate change, and the corona crisis we should prioritise the construction of elegant white houses and well-designed furniture? Well, not exactly. The original Bauhaus was all about renewal. It is the Bauhaus method, the notion of radically changing our way of thinking – to question how things work and re-invent them for a more humane society – that provides us with a model for tackling the most pressing issues of today.

A new way of thinking seems particularly urgent in two areas: climate change and European coherence. It is clear that in order for the planet to survive, there is no alternative to the green transformation. The basic precondition for Europe to become the first climate-neutral continent by 2050 is its political and cultural unity, or rather, an actually existing “unity in diversity” (to quote the EU’s official motto). Among significant parts of its citizens, however, Europe has a serious image problem. The European Union has not been exceedingly successful in evoking what the founding fathers of the European Cultural Foundation (ECF) have referred to as a European sentiment. 70 years after the signing of the 1951 Paris Treaty, member states are still lacking a sense of belonging beyond mere coal and steel. It is now time to change our way of thinking Europe. Because in order for Europe to survive as a political project, we must finally succeed in anchoring a culture of true solidarity beyond national borders among European citizens and decision makers. We need the New European Bauhaus (NEB), then, to help us build a united and sustainable Europe for the future.

Gropius’s vision and the NEB today
The original Bauhaus was Walter Gropius’s brainchild and grew out of the historical momentum of 1918. At that time Gropius had, by his own account, a visceral feeling that he was witnessing a turn of eras. Upon returning home from his deployment at the west front, he was initially convinced that sooner or later “things would snap back to the way that they had always been.”

Eventually it dawned upon him that instead of a return to normalcy, the post war period marked the beginning of something profoundly different, something new. The realisation of forming one constitutive part of a collective start-over after the war possibly marks the defining turning point in Gropius’s career. In fact, one can take from his words that it was almost an epiphany for him: “this moment – I cannot really describe it actually – has been of great importance for my personal development. It re-aligned my whole thinking.” Hence borne by a spirit of renewal, Gropius went on to merge the Weimar school of arts and crafts with the local academy of fine arts, to establish the Bauhaus school within less than a year after his aha-experience.

Fast forward to today: the hundredth anniversary of the Bauhaus now lies two years behind us and in her 2020 State of the Union Address Ursula von der Leyen invoked the formation of a New European Bauhaus with the goal of bringing the Green Deal to life. Expanding upon John Schellnhuber’s “Bauhaus der Erde” – the idea to switch from ferroconcrete to timber technology in the construction sector – von der Leyen envisions the New European Bauhaus as a multidisciplinary approach to implement sustainability. It is meant to combine various, yet to be articulated “streams” of action, architecture being only one of them. Besides the construction sector, von der Leyen addresses particularly the Cultural and Creative Industries to come up with different ways of shaping the New European Bauhaus.

ECF’s take on the NEB
The European Cultural Foundation understands the NEB as a movement with two interdependent streams. These are: first, a new sustainable approach towards the built environment and, second, the (re-)construction of a positive European sentiment.

In line with demands of climate researchers and architects, we embrace a turn to timber technology and intelligent upcycling. The construction sector is arguably the strategic leverage point to reach the Paris Agreement goals, as 40% of emissions are attributable to our built environment. The ingenuity of timber as a building material lies in its double effect of producing less emissions whilst also functioning as a carbon sink. That is, timber technology emits fewer carbon and absorbs that of other pollutants at the same time. With this in mind, the NEB should focus on transforming our existing building stock and infrastructure in a sustainable way. Teardown and reconstruction produce double the amount of CO2. The challenge therefore lies in advancing intelligent upcycling as opposed to merely greenwashing the construction of new buildings.

On the “cultural side,” the NEB should be a vehicle to build European spaces – both physically and, especially, in people’s minds. Perhaps more than anything else, Europe needs the construction of a vivid, and markedly transnational public sphere. More people ought to tangibly experience Europe in their everyday lives in order to be able to develop a personal feeling of Europeanness. The NEB can thus become a gateway for the emergence of different civic fora, combining the creation of spaces for participatory democracy with the aforementioned principles of sustainable architecture. In line, then, with ECF initiatives such as the European Pavilions or a Homes of Commons Certificate, as well as our grantees’ projects (see e.g., NOOR from our Culture of Solidarity Fund) we see the cultural stream of the NEB as first and foremost a facilitator of civic engagement with a European purpose. Because beyond the work of EU officials, architects, and artists, we want to involve the public. In that sense, each and every citizen becomes a “construction worker” of the New European Bauhaus him/herself. 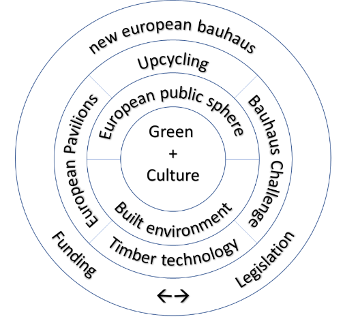 We have numerous additional solutions in mind on how to combine the two streams of the NEB (culture + built environment) in an effective way in order to – quite literally – construct a European sentiment through energy-efficient buildings: Let’s set up a European Case Study House Program, similar to the one declared in the USA in the mid-1940s to design inexpensive but decent houses for huge parts of the population. Let’s have a big architecture competition for EU embassies around the world. Let’s build European houses across Europe that are not just representations of bureaucracies but creative workspaces with open exhibitions, workshops, theatre performances, coffee houses to meet, discuss, imagine Europe. We are currently setting up a renewed Europe Challenge in association with the Amsterdam Public Library and a network of European libraries. As the focus of the challenge lies on forming a European public space, we think the challenge format fits ideally to the development of the European Bauhaus movement.

The name-controversy
Now, as regards the European Commission’s launch of the New European Bauhaus program, there has been widespread approval for the idea of setting up an interdisciplinary, European framework for the implementation of Green Deal goals. However, criticism emerged around the name. A recent petition, headed by the Jan van Eyck Academie, charges the original Bauhaus with gender discrimination, Eurocentrism, as well as sell-out to corporate capitalism, and thus questions its suitability as a role model. The argument goes that the historical Bauhaus exemplifies precisely the kind of asymmetrical power relations and structural inequalities that ought to be crushed today. Architectural historian Michael Siebenbrodt interprets the Bauhaus in the exact opposite way. For him, the Bauhaus method is characterized by its radical attempt to “analyse conditions and things, to question their purpose, and to consequently reinvent them.” From this perspective, it would be very much in the Bauhaus spirit to critically deconstruct its own history and reconsider its understanding of inclusivity in the context of contemporary discourses. The question of the Bauhaus’s suitability as a role model remains to be discussed in an open way as part of the project’s “listening phase”.

In my opinion, the historical Bauhaus is an appropriate and in fact very fitting name giver for a fresh, interdisciplinary take on building Europe’s future. The crux of the matter is, of course, to accommodate Gropius’s basic idea of societal progress through renewal to the specific challenges of the 21st century. This decidedly New European Bauhaus must make sustainability and inclusivity – in terms of both diversity and affordability – the cornerstones of its actions. However, if the European Commission wants to live up to the NEB’s proclaimed grassroots approach, it should engage in- and indeed actively foster critical debates about it. Otherwise, their aspiration for the NEB to eventually develop into a people’s movement has little credibility.

Building a better Europe
In short, the New European Bauhaus is about a new culture of building Europe. This entails the construction of a European sentiment as much as a turn towards sustainability in the actual construction sector. The ingenuity of the Bauhaus idea is that its claim to design a better world is meant to be interpreted and re-interpreted in different environments and progressing historical circumstances. The Bauhaus school generated a variety of things and methods that seem self-evident today but were truly revolutionary to their time. Gropius’s glass curtain is a case in point, but also the Bauhaus curriculum’s “basic course” which has since been adapted by universities and schools around the world. Today we don’t think of a glass façade connecting our interior living spaces to our environments, or of studying preliminary courses before specialising on a particular subject as bold inventions because they just make sense. The New European Bauhaus challenges us to now come up with the ideas that will be deemed self-evident in 50 years because they “just make sense” for a better living together.