Subscribe to our newsletter
I accept all terms and conditions
There was an error, please try again later
Thank you for subscribing!
Stories of Europe: Europe and the Climate Leviathan, by Eleanor Penny [2019] Back
Support us

Stories of Europe: Europe and the Climate Leviathan, by Eleanor Penny [2019] 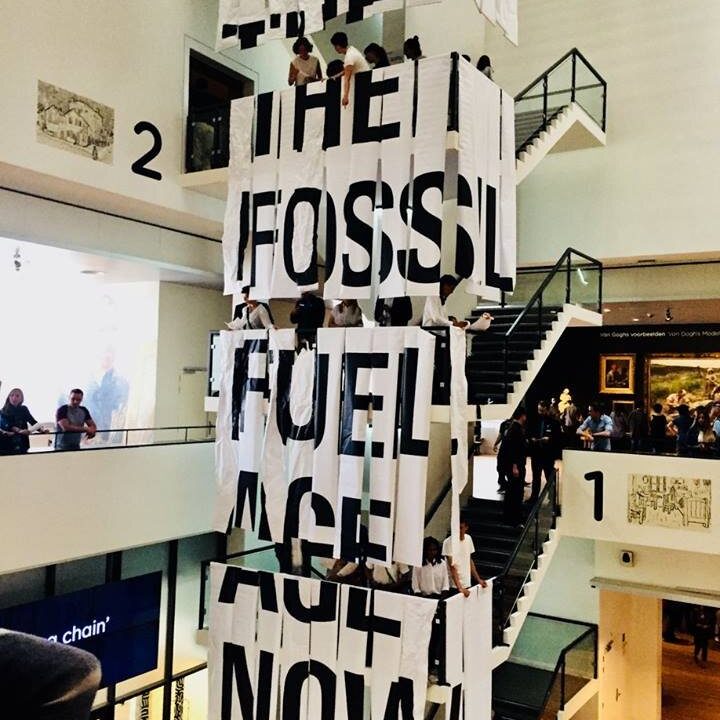 On 9 June 2018 the collective Fossil free culture NL orchestrated a performative intervention in the Van Gogh Museum in Amsterdam. Courtesy of Alejandro Ramirez.

Eleanor Penny is an essayist and poet based in London. For this publication, she reflects on how Europe has been tackling the climate crisis in recent times, condemning the role of extractivist economies and issuing a warning about the considerable role European far-right movements have been able to play in framing the climate discourse.

A United Nations special rapporteur on extreme poverty and human rights has warned that “human rights might not survive the climate crisis”. Philip Alston has cautioned the world that with basic supplies of food, water, housing and medicine under threat, “The risk of community discontent, of growing inequality, and of even greater levels of deprivation among some groups, will likely stimulate nationalist, xenophobic, racist and other responses. Maintaining a balanced approach to civil and political rights will be extremely complex.”

As the dreadful promises of ecological catastrophe slouch steadily towards us and concrete progress on decarbonisation stays sluggish, climate panic is rising to a global chorus. Scarcity of food, water, livable land and resources are right around the corner. Disenchanted with the inaction of domestic governments, many progressives look to the EU as a rare bastion of forward-thinking and grit on both climate questions and human rights. They point to its leadership on the Paris Agreement, especially vital since Trump’s notorious withdrawal, its ‘pioneering’ research into green technologies, and the fact that a number of key Member States matched and bettered the emissions reduction targets laid down in the 1997 Kyoto Protocol. So far, so rosy. But the EU’s forward-thinking and tough talk on climate change are always thwarted, diluted and compromised by its more fundamental political commitments to growth, to the preservation of profit, to the free movement of capital. So how, in this context, can the EU square the circle?

The Paris Agreement enshrined the commitment to foster trade links only with countries that signed up to it – a key practical step in turning a potentially vague, hand-waving declaration into a policy with teeth and muscle. But when Trump’s administration, crammed to bursting with an unsavoury allegiance of oil lobbyists and climate deniers, threatened sanctions against the EU, those commitments were swiftly shelved in order to open talks. Free trade deals which endanger even the most meagre environmental protections have been the mainstay of economic negotiations for many years. The notorious Energy Charter Treaty is one such example. It has for decades been championed for its ability to create a utopia of frictionless exchange where money and goods could flow freely across international borders: generalising an ‘Investor State Dispute Settlement’ procedure that allows private companies to sue governments in secret for loss of profits – past or ‘potential’. Private companies can (and indeed, have) scuppered governmental efforts to tackle environmental degradation, all in the name of business interests.

Defenders of a nineties-style ‘third way’ argue that this isn’t necessarily contradictory to the goals of a sustainable planet. They cling to the gospels of a floundering liberalism, which claims that free markets can flourish alongside a kind of laissez-faire culturel and moral pluralism, all stewarded by the distant beneficence of technocratic governments that need not dirty their hands in the business of real change.

But here’s the problem: researchers have consistently found that combating climate change means being prepared to tackle business interests head-on, from fossil fuel corporations to the banks which make their capital-intensive operations possible. As Alston and many others fear, a failure to do this basic task means careering the planet into political and moral catastrophe. Thus eternally capitulating to business interests means gradually undermining the material basis for the social liberalism under which the EU justifies – and indeed celebrates – much of its existence.

Many economists have argued that this tendency to protect capital before climate is baked into the constitution of the EU itself. Despite its superficially progressive charms, the network of organisations enshrines a neoliberal politics whereby the architecture of both the nation-state and its supranational counterparts act not like vehicles for democratic policymaking, but as conduits for the smooth flow of capital – at any cost.

In a traditional liberal imaginary, no contradiction emerges between this goal and its human rights commitments: in a liberal democratic state, a lightly regulated free market guides a free people into a halcyon dawn of unspecified ‘progress’. But the challenges of the climate crisis warp the liberal imaginary into a twisted series of contradictions. They pit people against profit in a pitched battle for survival, throwing into sharp relief the incongruities of an institution that claims to act in the interests of both. If this task were ever possible, that time has passed. The EU’s efforts in global governance bear an ever-dwindling connection to the globe it is attempting to govern.

So if faithful dedication to company interests is a doctrine of disaster, what new political ideologies will rise to take their place? A brief look at EU politics gives us a grim answer: that Alston’s prediction is already being vindicated by the rise of far-right parties across Europe. We have seen a startling rise in authoritarian populism and rising anti-migrant sentiment; treating human movement not as the symptom of a much deeper problem, but as a blight to be stamped out, legitimising the use of all force, and a rejuvenation of a ruthless, weaponised state, in which human rights are a minor inconvenience to be easily brushed aside.

If the EU does not make good on its promises of climate clean-up, then we will be left to manage the wreckage – and that management will likely be far from ‘progressive’. When a challenge to capital has been shelved, human rights experts and campaigners have warned that governments will choose the only other option obvious to them: a roster of authoritarian policies to protect their own access to resources, whilst shifting the blame for economic collapse onto the already marginalised. For the growing far-right movements around Europe, already in the business of manufacturing fear, such a crisis is a heaven-sent opportunity for political triumph. The enemies of freedom can pose themselves as the guardians of prosperity, framing their reactionary and Malthusian policies as a necessary tonic to the rot of society, and a way of securing the lion’s share of the planet’s dwindling resources for a chosen people. Pan-European far right group ‘Generation Identity’ has taken an explicitly eco-friendly pivot in its propaganda, popularising the slogan ‘Save the seas / Plant more trees / Deport refugees’.

The EU has proved sclerotic and/or unwilling to tackle this phenomenon. Indeed, its austere monetarist crackdown on southern debtor states has been charged with fanning the flames of far-right extremism by plunging more people into desperation, and reviving the electoral hopes of more bourgeois reactionaries looking to cynically clean up in the carnage. They’ve proved more successful in thwarting the efforts of the far right’s most concerted opponents, drawn from more radical left spheres of society who openly challenge the ‘neoliberalism’ of the EU. Whilst from Viktor Orbán to Matteo Salvini, the far right tend to be openly business-friendly; embracing an extractivist economic model whilst loading the blame for and costs of its failure on marginalised groups. The EU might not consciously embrace the far right, but the far right poses little structural challenge to the economic models that the EU is designed to promote – paving the way for an uneasy series of ententes between the technocratic centre and the populist right. Once again, commitment to an economic model at the root of climate change leaves the EU unable to fulfil its nominal commitments to human rights.

This Malthusian attitude has dominated the European political landscape in the past few years – and not just in the expensive-suited or jackbooted ranks of the far right. As the migrant crisis rose to a steady pitch, many states claimed that there were simply not enough resources available to accommodate the flood of new would-be citizens, many of whom fled crises and conflicts catalysed by climate change. ‘We are full’ became a clarion call to justify untold humanitarian outrages at Europe’s borders; all in the name of protecting the freedoms at its centre. Human dignity is broken on the wheel of global scarcity – whether real or manufactured.

This is the challenge for an institution with a Human Rights Charter at its centre: whether it is prepared to fend off the threats to those rights by a failed economic model. Across the continent, people are agitating for a ‘Green New Deal for Europe’. Some of its most prominent champions like Yanis Varoufakis see it as an opportunity: with a shift towards climate justice comes a shift away from punishing neoliberal orthodoxies that have led to skyrocketing inequality across the continent. One thing is for sure: something has to give.

Climate change is often understood as an ecological problem; a crisis of the natural world that its enlightened human stewards must fix – for the sake of the polar bears on shrinking scraps of ice, the penguins caught in oil slicks and the fish choking on plastic. A problem of human charity towards the flora and fauna with whom we share a globe. This attitude desperately strives to defend a distinction that does not firmly exist; the distinction between the natural and the political and cultural. It puts a comforting distance between human society and the impending climate crisis. But we cannot afford the luxury of comforting dissimulations. Human civilisation and human politics is at its core a way of arranging humanity’s relationship with the rest of the web of life; food, land, water, the wealth of the earth, the basics of a worthwhile existence. With those fundamentals of life compromised comes a crisis in the political systems intended to manage them. This poses a fundamental challenge to our political institutions, a fact which they, sluggish to the point of complacency, don’t seem to have truly metabolised. Whether or not they are interested in anthropogenic climate change, it is deeply interested in them. The climate leviathan will bend all people to its might, the faithful and the unbelieving alike.