Subscribe to our newsletter
I accept all terms and conditions
There was an error, please try again later
Thank you for subscribing!
Courageous Citizens: Geraldine Lavelle Back
Support us

Gerladine Lavelle is the next in our series of short interviews with 2018 Courageous Citizens grantees.

My idea focused on raising awareness about the challenges of inclusivity for those living with disabilities and participation in sporting activities. There are many personal and environmental factors that play a role in determining the extent a person with a disability can participate in sports or physical activities (Zwinkels et al., 2015). Barriers (including physical, transportation and programmatic challenges) can be difficult to overcome and as a result, they can limit people with a disability in Ireland participating in sport and physical activities (Zwinkels et al., 2015). My idea of an online peer-to-peer platform wished to highlight sport as a form of inclusiveness both mentally and physically for individuals with physical disabilities. I did a series of interviews with individuals at all levels of sporting abilities and gave their stories a platform to be presented. I hoped to inspire others to become active by show casing different possible activities at all levels of abilities.

I also gave a series of talks in schools, libraries, community halls, etc to give children and adults alike an increased awareness of disabilities and the importance staying active plays in inclusiveness. It was my view to talk about things that need to progress in Ireland in relation to disabilities and that people’s attitude as a whole may change towards disabilities using sport as a medium for delivering my talks.

Did your participation in the incubator workshop help you?

I gained alot from my participation in the incubator workshop. It gave me focus as to the potential communities/people/partners with whom my idea could be co-developed with as well as expanded upon into the future. It helped me to establish the main output from the project and through what medium. I established from the incubator workshop that dissemination via educational talks and training tools was a good idea to empower and educate individuals with physical disabilities and the wider community of the importance of sport for positive health and wellbeing. It was also great to meet the other grantees and to gain insight and inspiration from eachother. By talking through our projects with one another we were able to establish our projects weaknesses and areas we needed to build on and how. I came away from the workshop much more focused and content with my project theme than before going there.

Did you encounter difficulties in trying to realize your project and did you overcome those?

Personal difficultues – Initially, I wanted to travel to meet and see as much sporting activities as possible being undertaken. As time went on, I realized this much travelling was not feasible on my body due to constant pressure skin breakdowns so I contacted some of the authors of the sporting articles by phone interviews and travelled to as many that were personally and financially possible also allowing travel for sporting events of my own.

Financial difficulties – Careers and drivers fees were going to be a larger amount in my budget than I had anticipated when I began organizing trips. My Family members offered to assist me with the driving and care needs at a substantially lower fee so I would have more to spend on benefiting my project.

Technical difficulties – As I did not have the technical skills to build a website, I recruited the abilities of a website expert. We worked continuously on altering the page to the best possible structure. By requesting people to register on the site, this was designed to help to progress the website in the future. The project in the future Hope’s to have registered members as webinar viewers to future webinars with public speakers. The website designer also trained me how to build classes, design forums and use the website efficiently. This training was factored in to his overall price.

Can you describe a moment of glory? What did it teach you for later steps in your project?

RTÉ Ireland’s National Television and Radio Broadcaster, heard about my project through my online media presence and the work I was doing in raising awareness about the challenges of inclusivity for those living with disabilities and participation in sporting activities.

Raidió Teilifís Éireann is a semi-state company and the national public service media of Ireland. It both produces programmes and broadcasts them on television, radio and the Internet.They asked me to take part in a documentary series dedicated to those who have incurred trauma in their lives but have found the inner strength to take stock and rediscover a new sense of purpose and turned the negativity in to something positive, the show was aired on October 1st at 11.15pm on RTE. 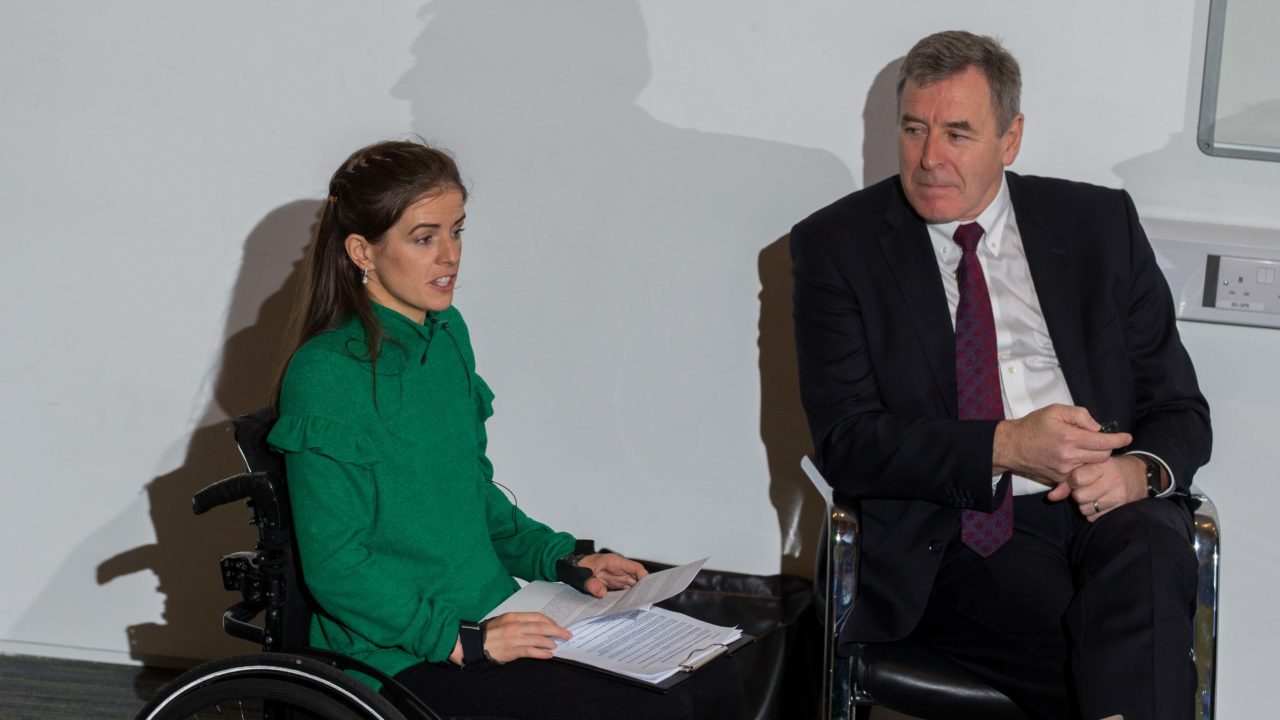 This gave me such a boost and confirmed my belief that I am doing the right thing. I am hoping it will continue to change more peoples perceptions and outlooks on different forms of abilities. Frustration, misunderstandings and false perceptions are born out of a lack of education about disabilities. Only through education and the power of knowledge from an early age can we raise awareness and encourage conversation amongst the neuroscientists, software programmers and inventors of potential practical aids of the future. Asking questions, seeing beyond appearances and discovering about the differences that make up the people in our world is essential in redefining the mould and breaking stereotypes.

The biggest surprise to date was the feedback and intelligent questions I got when presenting my talks in schools. Their openness and honest, interested attitudes were fantastic to see. If children understand they grow up with a better idea of what it is like to be different than they are.

After all, how can they learn about all the differences that make up the people in our world if they don’t ask questions? The more they understand the less they have to be afraid and unsure of.

I have presented my work in several National schools around the west and north west of Ireland as part of a Courageous Citizen’s European Research and Development grant. The talks were directed at children ranging from 6 years to 12 years of age to raise awareness of all types of disabilities and what important factor sport plays in their lives from a point of inclusivity. It feels like one of the most worthwhile things I have done, talking to the children. The talks were also about inspiration and motivation and the determination to get through life.

It feels like one of the most worthwhile things I have done, talking to the children. To talk to the future generation of road builders and infrastructure builders and to start from the ground up. This is also why I thought it might be a good place to start with the younger generation when it comes to awareness around disability and accessibility. I want to create a normality around accessibility in sport, schools, buildings, restaurants, roads and how things are built and how society creates a sense of inclusion for all. 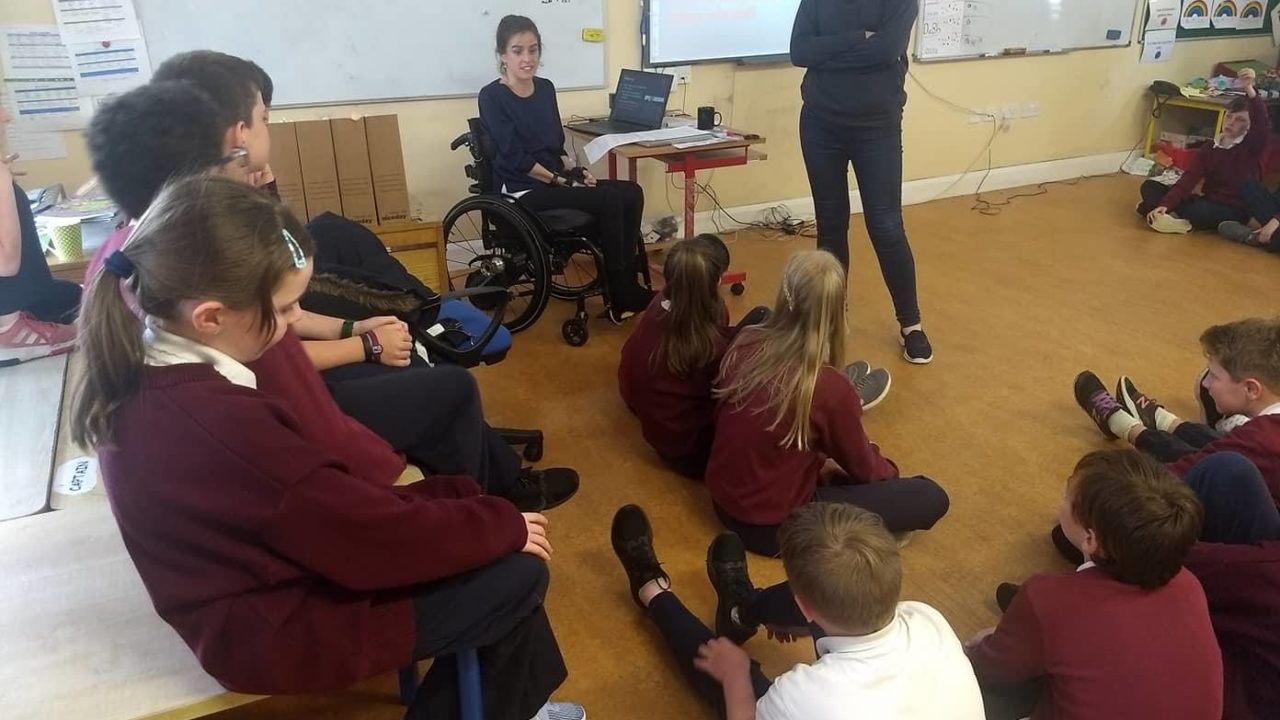 Sport and physical activity are central to the fabric of life in Ireland. Everyone, no matter what their background or circumstances, should have the opportunity to engage in sport and physical activity at a level of their choosing. There’s no doubt sports and remaining as active as possible since my accident has helped me enormously in all aspects of recovery. Sport is a great outlet for overwhelming and debilitating emotions offering a platform of fun and social activity.

Individuals with disabilities face challenges around inclusivity in sporting activities and events. Small changes can have a big impact in the lives of people around you. Awareness and understanding is key so lets keep knocking down walls and overcoming those challenges together. My project hopefully communicates the benefits of physical activities to all, and in turn leading to a more inclusive Europe. I feel honoured to be a part of this programme.

Did you achieve what you dreamt of? Or even more?

I feel I have achieved a successful form of what I set out to do. I feel I raised awareness of key issues impacting on individuals with disabilities and highlighted the importance and benefits of sports in the lives of those living with disabilities. I Feel I gave a direct voice and representation to people with disabilities in sport in Ireland. Disabled people face battles of disablism and barriers every day and they need support (O’Brien et al., 2015). A lack of accessibility and limited movement of disabled persons in sport is the accepted norm (Muraki et al., 2000). This needs to be addressed.

Hopefully, my project will inspire others to achieve inclusiveness and improve their health and wellbeing, both mentally and physically, through the power of sport. I feel I designed and created a successful project. However, there is always room for improvement. Areas I found hard were the media aspect of my project and getting news out there to inform the public about my project. Also trying to generate contacts within companies and organisations to co-develop webinars for the future was difficult as only a few returned emails/calls etc.I feel I generated an extremely positive impact from feedback I received from adults and children alike. I got great reports about my talks and I have been asked to partake in two more talks this month September as well to a nursing conference in Galway and another Library in Galway.

How will you further develop your project in future?

Webinars may expand the project and develop insight, education and learning for the person with the disability, their families and to the wider community about the importance of physical activity to leading an independent lifestyle and overcoming personal challenges. There is potential to generate an income from subscriptions to webinars in the future. Initially, the geographical focus was contextualised in a predominantly Irish context. However, there is potential to expand and develop this idea of talks on a European and international scale. The use of online platforms means that past restrictions of geographic boundaries in the spread of new bold ideas can be navigated relatively easily in this modern globalised economy.