In the interview series with Courageous Citizen grantees here is the story of Khaled Barakeh, a Berlin-based Syrian artist and cultural activist whose work often revolves around power structures in context of identity, culture and history. He and his team are working on realising the Syrian Biennale, the first mobile exhibition showcasing Syrian and international artists within the framework of a biennale 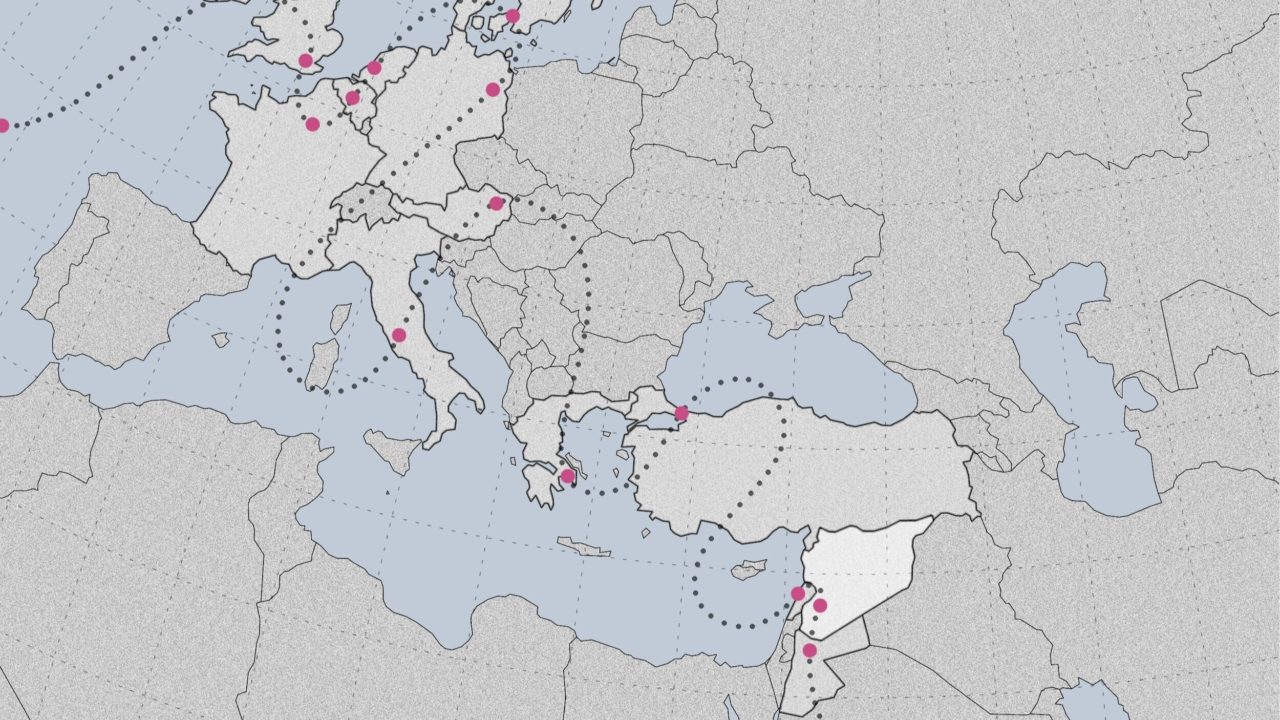 What was your idea about?
The Syrian Biennale is the first mobile exhibition showcasing Syrian and international artists within the framework of a biennale, taking place every second year. The Syrian Biennale will change its location with every edition, following the route of Syrian refugees from Lebanon to central Europe and elsewhere around the world.

During the last 9 years, given the worsening political and social situation, the majority of artists were forced to flee Syria. Before the war, Damascus used to be the cultural capital of the country, but then it shifted alongside the creators of Syrian culture – as of today, it’s cities such as Beirut, Istanbul or even Berlin that are considered to be new representatives of Syrian art. Some Syrian artists who fled the country reached Central or Northern Europe, but due to different restraints, some ended up in various countries considered to be part of the so-called “refugee route” which are not always their desired destinations. With the whole world somehow involved in the Syrian case, we find it crucial to give an opportunity to the Syrian community to be actively involved in the global art scene. As it is impossible to freely organise an exhibition of this scale in Syria, we decided to carry our culture, experience and collective memory wherever we go.

Hoping to counteract the defragmentation and displacement of the Syrian identity, the Syrian Biennale serves as a contribution to a much-needed conversation around Syria’s media-generated image; through supporting, empowering and connecting Syrian cultural producers around the world it represents and preserves Syria’s cultural heritage beyond national borders. We aim to introduce Syrians to their new societies and vice versa, encouraging a dialogue between cultures and building international networks for cultural producers of various backgrounds. The project is committed to representing an equal balance of Syrian artists (inside and outside their country), artists coming from the Biennale’s host country and internationally acclaimed artists. The extensive research and databases contained within the SYRIA Cultural Index framework will be applied to develop a Syrian Biennale that is as complete, responsive, and aware as possible. At the same time, the experiences gained through producing the Biennale will continue to enrich and inform SYRIA Culture Index.

The Biennale aims to be more than just another exhibition of contemporary art or refugee-oriented project – it will be a high-end art event accompanied by lectures, performances, music and debates that will benefit the local community and build a sense of belonging for the newcomers.

What difficulties did you encounter and how did you overcome those?
There have been three main challenges in the research phase of our Syrian Biennale project. Firstly, the availability and capacity of players in the art world to reflect and respond to our Syrian Biennale concept. Secondly, the changing political situation in Beirut, which has required us to change our plan to no longer conduct a research trip to Beirut or seek feedback from key institutions. And thirdly, Khaled was unable to obtain a visa for the research trip to Turkey due to being Syrian.

These challenges, along with our limited staff capacity, have led to delays in the research phase of the Syrian Biennale project, however we believe the delays are leading to a more thoughtful concept with more buy-in from other players in the art world.

Can you describe a successful moment? What did it teach you for later steps in your project?
The Syrian Biennale has been extremely well received across Istanbul, Berlin, New York and Toronto. Numerous art museums, funders and organisations want to partner with us on our project and we have found support from a large number of significant venues.

Most significantly, while Khaled was in New York, he received many offers of support, engagement and collaboration for the Syrian Biennale project. Including support from, Sharjah Museums Authority, the Middle East Institute, ArteEast, Artists at Risk Connection, Residency Unlimited, Lower Manhattan Cultural Council, the C-MAP program at MoMa, e-flux, Artslink and many more.

What was the biggest surprise you did encounter in the project?
We have been pleasantly surprised by the overwhelmingly positive reception on the Syrian Biennale concept. The interest in the concept has been immense which has further reinforced our idea that it is a worthwhile and meaningful project. The other significant surprise has been the geopolitical situation in the region, in particular the situation in Beirut with has directly impacted on our plans for the Syrian Biennale project.

What are the next steps for your project?
Following the completion of our symposium in April 2020, we will finalise the Syrian Biennale concept and initial location to begin extensive fundraising to realise the first mobile Syrian Biennale. We hope to fundraise to hold the first Syrian Biennale in 2022, most likely in Berlin.

How does your project contribute to making Europe a more inclusive, more democratic, perhaps even more fun continent?
Through the art lens, the Biennale will explore current socio-political issues and enhance creative integration of the Syrian and refugee communities within their local communities while still nurturing and preserving their cultural identities; it will empower all parties by raising complex issues of today – such as themes of migration and the ever-changing socio-political situation in Europe – creating an open space for international discussion, not limited to any standpoint and celebrating diversity. People of diverse backgrounds, religions and even opposing ideologies and political views will come together in search of an active exchange of varying viewpoints, leading to a more creative and innovative thinking.

We are hoping the Syrian Biennale will lead to a better understanding and acceptance of the Syrian community and will contribute a counter narrative to the stereotypes of Syrian and refugee communities.