Subscribe to our newsletter
I accept all terms and conditions
There was an error, please try again later
Thank you for subscribing!
femProcomuns – Weaving debates Back
Support us

In Wu Ming collective’s words “Stories belong to everyone. They belong to the community… Open and choral narratives are urgent.”

In the current situation, femProcomuns believes it is vital for communities and grassroots groups to share experiences, practices and thoughts across Europe. Knowledge should not remain enclosed in linguistic, cultural and communicative echo-chambers created by individualising and centralising data tracking technologies and algorithms of discourse and control, threatening technological sovereignty. Their project ‘Weaving deabtes’ aims to find better technical solutions (semantic wiki, templates, bots, machine learning, etc.) for multilingual exchanges and to continue testing them in events and meetings that take place in the coming months. Users will be able to browse, view and add content in a chosen language and connect it with content in other languages.

In-depth, we discussed what made them think of the project’ Weaving debates’ and how they envision the project growing from local to pan European.

We were conscious we need to create spaces, physical and digital spaces, to trace and connect conversations, ideas, projects, and stories that are already happening but are not connected among them as they are often enclosed in silos.

It would seem we are in a connected era, where social media tools (text messaging, microblogging, social networking, video sharing, etc.) allow people to be more in touch. Still, in reality, we are more disconnected than ever. A few giant tech companies control the infrastructures of public discourse and the digital environment. Using their algorithms, they enclose people and their thoughts into echo-chambers where they only receive paid messages and messages they already agree with. These algorithms, controlled by tech giants, prevent the free-flow of ideas, debates, conversations, the free exchange of narratives and experiences. This only worsened in-corona, when the right of free assembly was compromised, and most conversations moved online and onto controlled infrastructures of public discourse.

We need to imagine and create open infrastructures for public discourse. This involves the construction of technological infrastructures and other tools and methodologies that allow people to document and trace our stories and conversations and exchange them with a great diversity of people from different lands, backgrounds, cultural realities or mother-tongues. To do that, we need to use open Free, Libre and open software and train ourselves to document, through note-taking, translating, re-elaborating contents or visualising connections, not depending on having big budgets or organising huge conference-like encounters to be able to exchange thoughts. 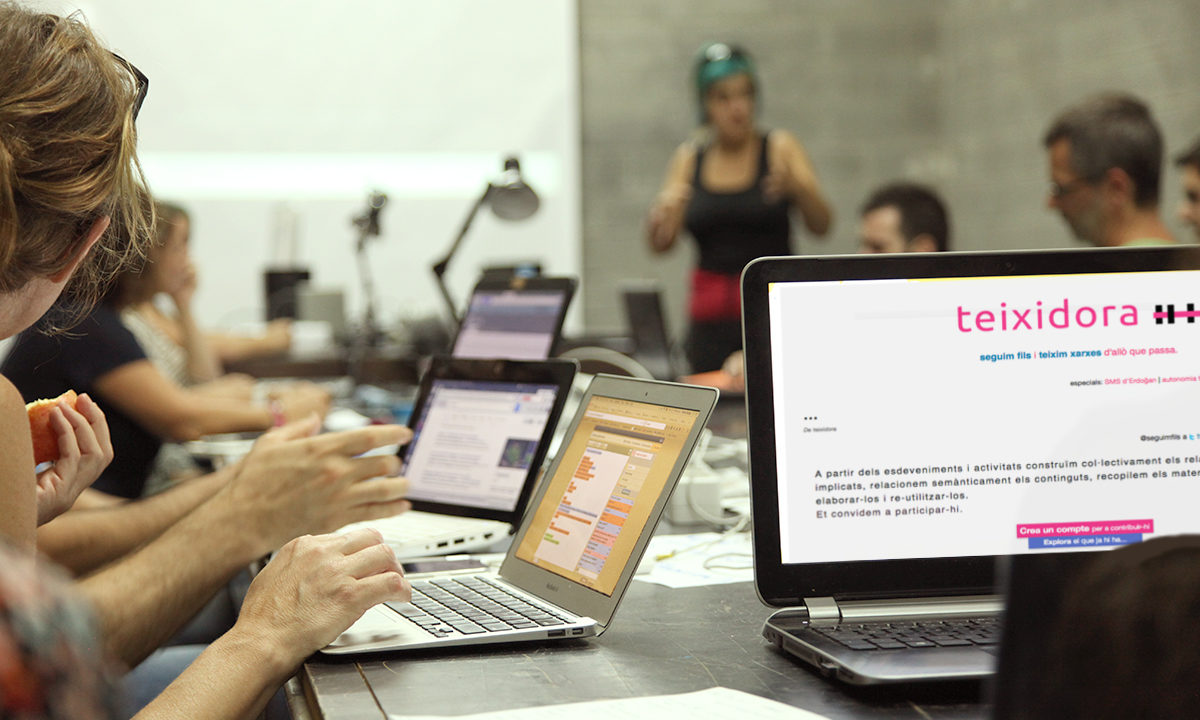 At femProcomuns and Remix the Commons we were already using tools looking to achieve that. A Media Wiki is an open-source wiki engine to store text content into a database. It is the engine under Wikipedia and used as a knowledge management and content management system on thousands of websites. We were also using another tool, a Semantic Media Wiki, an extension to MediaWiki, that lets you store and query data within the wiki’s pages. These data can be used in searches, for aggregation of pages, visually displayed in maps, calendars, graphs, etc.

At femProcomuns, we had developed Teixidora, a Semantic Media Wiki in the Catalan language, to follow debates and conversations by open and collaborative note-taking, generating cartographies of actors (organisations and individuals), semantically relating contents, and facilitating its re-use and re-elaboration. Remix the Commons were also using Semantic Media Wiki in French and English, to collect information, vocabulary, resources, initiatives and documents around the commons.

Finally, we have noticed a certain lack of new innovative open technologies in cultural spaces and thought that language technologies could facilitate the intercultural, inter-lingual communication among diverse experiences. Hence, to enhance the operability of the mediawiki, we started developing various bots, starting from automation of content import, to language correction and category/concept unification. Due to the open nature of the mediawiki, the implementation of the bots is relatively easy. The experience can help other similar projects with the mediawiki architecture since the developed code is also open.

We practise choral (collective) and open documentation methodologies in online meetings. Experiment with inter-linguistic note-taking as a means to real-time translating (similar to writing subtitles) and documenting events.

The resulting documentation can be collected in a Semantic Wiki or hosted, in a distributed manner, on other platforms to interweave content created in non-dominant subjects and languages. And the content languages can be automatically detected, tagged and corrected accordingly.

Using already existing digital platforms, Teixidora.net (in Catalan) and Remix the Commons wiki (in French), we have created a multilingual, interoperable, transparent space to document events and work meetings (face-to-face or online) and map people, projects, organisations and topics involved. Having a multilingual space may reinforce connections among individuals and support minority languages threatened by the homogenising practices and dynamics of globalisation.

This space allows to explore connections between ideas and knowledge, co-creating activist, educational, scientific, legal, journalistic or artistic content, promoting debate and consensus, connections between projects and people, delving into diverse interests, perceptions and perspectives, and in short, strengthening the European culture of solidarity.

This project contributes to the need to create spaces and digital spaces if needed. Everyone who is part of an affinity community or group can contribute and witness their debates and exchanges, even when participants do not share a common language, making collaborative and multilingual documentation online possible. It allows for a plural and diverse communities to become stronger. 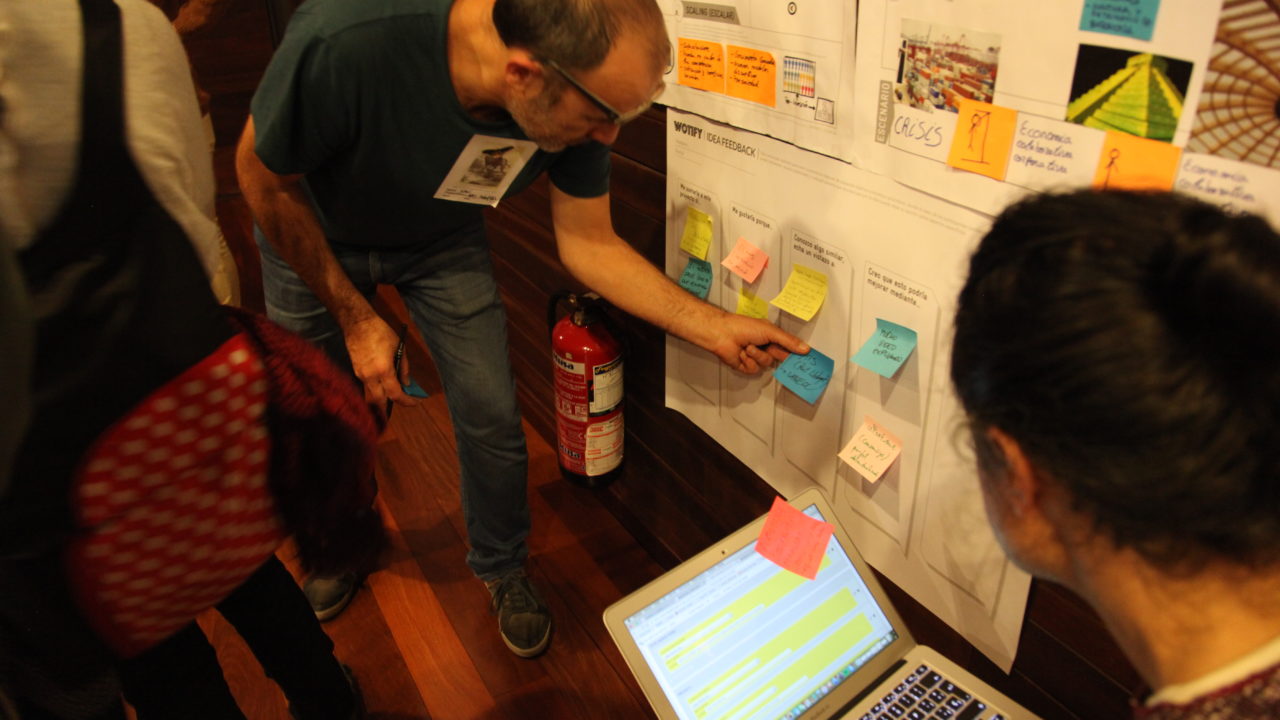 Growing from local to pan European

By documenting events, we envision we can make it possible for communities, grassroots groups (citizens, artists, researchers, activists,…) to share experiences, practices, thoughts across Europe and for knowledge not to remain enclosed in linguistic, cultural and/or communicative echo-chambers created by individualising and centralising data tracking technologies and algorithms of discourse and control, (such as Facebook, Twitter, Google or Microsoft) threatening technological sovereignty.

We are open to intercooperate with other SMW or other documenting platform initiatives, in Europe and elsewhere.

Making Europe an open and shared public space for everyone

One of the main challenges, in Europe, today is that capitalist corporations, aimed at maximising profit for a privileged minority, control our tools for teleworking, relating, and sharing; they watch over us, and they concentrate all the power. They also control the processes of documentation, information transmission, data processing and collection.

We are putting into practice an open, participative and grassroots model of documentation, data collection and processing, which is at the service of organisations and social movements to explore what has been documented and document their events.

Our project offers tools owned and managed by their producers and their users, to be adapted to their own needs and to be used with their languages.

Our tools are based on Free/Libre software already being used in many other local and global projects. They are being built on existing alliances that strengthen the means to implement and revitalise European and international partnerships for sustainable development.

Culture of Solidarity: Second round grantees