Subscribe to our newsletter
I accept all terms and conditions
There was an error, please try again later
Thank you for subscribing!
Colectiv Back
Support us

At the November 2019 International Documentary Filmfestival Amsterdam, we were proud supporters of the pathway Life in Europe. One of the films in that pathway was Colectiv, by director Alexander Nanau. His film is an uncompromising look at the impact of investigative journalism, and an painful study into the destroying effects of fraud and corruption on a society. Prior to Colectiv being released in Romania we like to draw your attention to the film, their protagonists and the power of art to cause positive change. 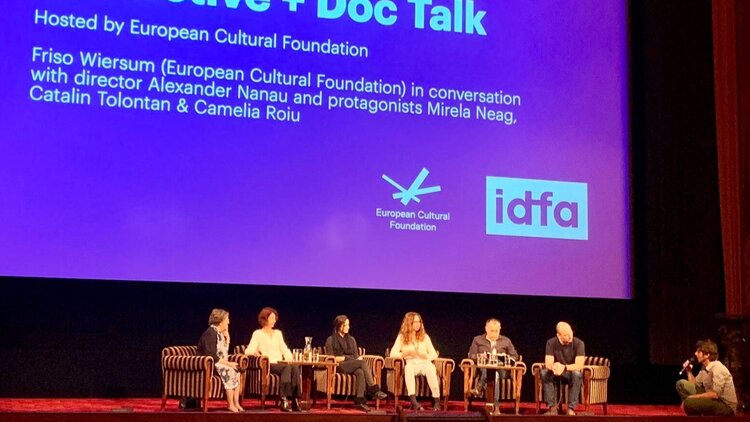 In November 2015 the so-called #Colectiv revolution brings thousands of Romanians unto the streets of their capital, and those of other cities. Many of the demonstrators wear national flags with holes in them, as in 1989, to show their contempt of the political class. For Romania counted amongst the most corrupt European countries, according to Transparency International, and it’s corruption in state systems that caused the death of 27 youngsters in a fire in nightclub Colectiv. The club had a permit, but contrary to regulations it had no fire-exits. According to media the responsible state-servants didn’t control on the permit, “as the nightclub only opens after their working hours.” The popular outrage caused by the 27 deaths is enormous. The then prime minister resigns. A technocratic government installed. The president promises in depth re-evaluations of the systems in place. But the worst is yet to come.

In the months following the fire in Colectiv, 37 more victims of the fire die in hospitals in Romania that were described as being of the same quality as ‘those in Germany’. The healthcare system has collapsed – not publicly, but in its actual functioning. Death rates for people being hospitalized in Romania are shockingly high, and seem not to belong in a European country, a EU member state. Protests on the streets continue. Some media dive into the case and one newspaper does so in particular; Gazeta Sporturilor. Yes, a sport newspaper.

At the end of 2015, film director Alexander Nanau together with HBO Europe Executive Producer for Documentaries Hanka Kastelicova, begin to research the subject. “By being right there at that time, I experienced the full extent of the blow suffered by a democratic European society which could never have imagined that dozens of people could die when going out to a club. The fire at Colectiv was a national trauma. It felt like everybody in the country was part of it. Like any single traumatized human, a traumatized society becomes easy to manipulate and to lie to. I have witnessed during the days after the fire an institutional lie about how the authorities were perfectly managing the tragedy, that was constantly repeated to a grieving population, through all media. I have seen manipulation silencing people and stopping them from asking questions for a time. While young people injured in the fire kept dying in hospitals. My very first attempt was to understand the direct impact of the tragedy on the private lives of the survivors and of the families who had lost their children in hospitals, after the fire.”

But that changed after realizing that those sports journalists were asking the right questions at press conferences, whilst also doing the old fashioned journalistic handwork in researching the deaths of fire victims in hospitals. “It was an organic decision to follow the very few that also doubted the official version of the events. The ones that were asking the unexpected, yet simple questions. So the office of the investigative team of journalists at the Sports Gazette, that started to investigate the role of authorities in the tragedy right after the fire, was the best place to start filming the part of the story I wanted to understand.”

Together with the characters followed in the film, we descend into a state of corruption most of us can not imagine. The journalists are contacted by a whistle-blower, a doctor working in a hospital. She reveals more about corruption in the healthcare system and sadly talks about how the system has dehumanized all involved. The great suspect in one of the corruption cases dies in a car accident. Yet again, street protests force another resignation, and another Minister of Health is installed. And with him some hope. For the Romanians. But also for us viewers, for this is a Minister who cares about the rule of law, who believes in Hippocrates’ Oath and who actually wants the system to change. Giving unprecedented access into a state institution, Vlad Voiculescu allows Nanau’s camera to be present in all of his steps, within the system this time.

Colectiv thus becomes a documentary about what it means to fight for something as transparency, or democracy, or a life in truth – even, or maybe especially, if you fear you will not succeed. Colectiv becomes a study in human perseverance against the odds, and builds a statue for small heroes who stand up against the lies by those in power.

In our current Europe, with populists in power and fake news on the rise, the film Colectiv asks all of us: “What is your price for the truth?”

Colectiv will be released in Romania on February 28 2020, followed by releases in the US, France, UK, the Netherlands and Australia.