Subscribe to our newsletter
I accept all terms and conditions
There was an error, please try again later
Thank you for subscribing!
André Wilkens Back
Support us

“I am a child of Europe, and like many of us, I have my very own personal European history. I have experienced Europe, have traveled it extensively. There were problems and crises, there were detours and flaws: such is life. (…) This Europe, imperfect as it is, is the best thing we have built in the last centuries.”

— André Wilkens in a conversation with his editor Ulrike Holler

André Wilkens is a Weltverbesserer (social entrepreneur) and author from Berlin, who works on European and international affairs, equality, climate change as well as for a more human digital world. He graduated in Political Sciences and spent many years living in Brussels, London, Turin and Geneva, working for the EU, the United Nations and various foundations. He initiated and is a founding member of the European Council for Foreign Relations.

André Wilkens has extensive knowledge of and experience in the non-profit, philanthropic, private and public sector in Europe. Having worked at the Open Society Institute and Stiftung Mercator he will bring his experience of building a vibrant open society into the Foundation at a time when the 2019 theme which will determine and guide the Foundation’s activities is ‘Democracy needs imagination.’

Wilkens is the author of two successful books and various essay collections. He will remain on the board of Die Offene Gesellschaft which he co-founded in 2016. 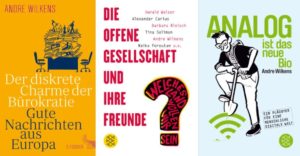 André Wilkens and Daniel Röder on the Battle for Europe in German newspaper FAZ (18.11.2018)