Subscribe to our newsletter
I accept all terms and conditions
There was an error, please try again later
Thank you for subscribing!
‘The Netherlands starts becoming a cultural outsider in Europe’ Back
Support us

‘The Netherlands starts becoming a cultural outsider in Europe’

On October 28 2022 Dutch daily Trouw published a call to action by our director aimed at Dutch politicians. The call to action claims there can be no recovery after the pandemic without respect for culture and the role of the artist. That 2% of the European Recovery Fund should be allocated to culture – as intended by the European Parliament – could be the start of a creative healing process, at the heart of Europe’s transformation. The text is published ahead of the annual policy conversation on the Cultural Deal.

The Netherlands starts becoming a cultural outsider in Europe

Young artists, film makers, musicians, writers, designers and other alternative thinkers are drowning in the wake of the coronavirus pandemic. Work has dried up; an entire generation of creative talent now appears to be languishing in jobs in hospitality or at the GGD – the Dutch Medical and Healthcare Agency. Meanwhile, under settlements agreed in the European Parliament, Brussels has allocated 120 million euros for culture and the arts in the Netherlands.

But the Rutte government is dragging its feet in applying for the 6 billion euros in total earmarked for the Netherlands from the European Recovery Fund. Each member state gets a slice of this fund, 2% of which the European Parliament has voted to allocate to the arts and culture sector. Most EU member states have long since claimed the European funding and invested the agreed share into arts and culture projects. The Netherlands hasn’t even mentioned the cultural sector in the plans going to Brussels – which have been ready for months – nor claimed the money.

The Netherlands is the last country to submit its recovery plans officially to Brussels. Politicians should now seize this opportunity to anchor art and culture firmly into the application, and make culture an intrinsic part of recovery and renewal in the Netherlands following the Covid pandemic.

This matters, because any transformation of society – whether in the field of sustainability, digitisation or democratisation – needs people with creative flair and imagination: designers, thinkers, the bold, who help shape the future and offer critical reflection. A Cultural Deal – a system of agreements giving culture a structural and systematic role in the European agenda for renewal – is also needed for the success of European Commissioner Timmermans’ Green Deal, under which European society must undergo fundamental reform in the area of climate change. 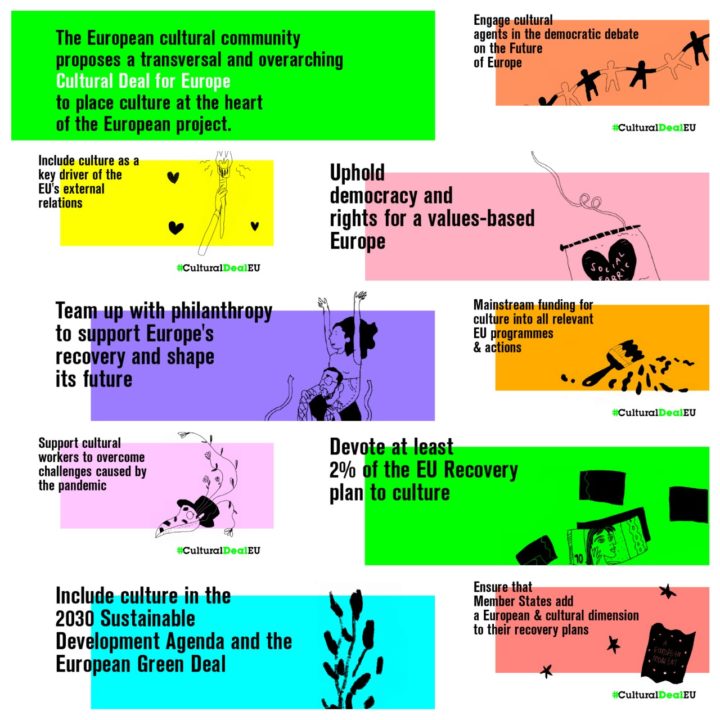 Outsiders
By excluding culture from the recovery plans, the Netherlands is becoming a cultural outsider in Europe. France, Austria, Italy and others allocated this two percent to their future creative thinkers long ago. Last year in Brussels, Ursula von der Leyen launched the New European Bauhaus, a major initiative for urban public space, under which she is trying to bring together the worlds of architecture, culture, new technology and citizenship. She holds the view that art and culture have important contributions to make to the green transition and digitisation – two key concepts in the European Recovery Fund that should point the way out of the crisis.

She also believes cultural projects help deep wounds to heal following times of crisis. Founded by the German architect Gropius following the horrors of World War I, Bauhaus was a famous art school for fine arts, crafts and architecture, which sought to bring about social reform. The aim was to create a better environment and ultimately a better world. The Bauhaus movement was the starting point for many cultural projects under the celebrated New Deal, intended to drive America out of the doldrums of the Great Depression of the 1930s. Back then, the Roosevelts ensured that, alongside infrastructure and social projects, hundreds of young writers and artists, travelled the continent reporting on the consequences of the crisis through the Writer’s Project. This not only produced world-renowned writers such as John Steinbeck, but also promoted shared values, connections and coherence in a country broken by crisis.

The healing, comforting and reconciliation power of culture has been demonstrated time and again in times of crisis, disaster and war. Artists such as Geert Mak and Abdelkader Benali, museum directors and politicians alike have been saying for months: there can be no recovery after the pandemic without respect for culture and the role of the artist. That 2% of the European Recovery Fund allocated to culture is intended by the European Parliament to be the start of a creative healing process, at the heart of Europe’s transformation. The Netherlands must not be left out.