Subscribe to our newsletter
I accept all terms and conditions
There was an error, please try again later
Thank you for subscribing!
The Schuman Show bursts the bubble Back
Support us

The Schuman Show bursts the bubble

On your website you introduce the show as “We are the comedy show the EU has been waiting for, here to burst the Brussels Bubble.” Let me start with the first part of your introduction: why has the EU been waiting for this comedy show?
Most people regard EU topics as boring and difficult. So they don’t read or watch EU news. Which is problematic, as it is part of our democracy and every five years we are supposed to show up at the ballot box and vote. Comedy can be a way to make the EU more approachable. So at least people understand what is going on.

And why is it important to burst the Brussels bubble?
Where most of the people don’t really know what is going in the Brussels bubble, the diplomats, politicians and lobbyists certainly do! Every day, they know how to find each other and how to influence the decision making process. It’s time for the rest of Europe to become part of that. 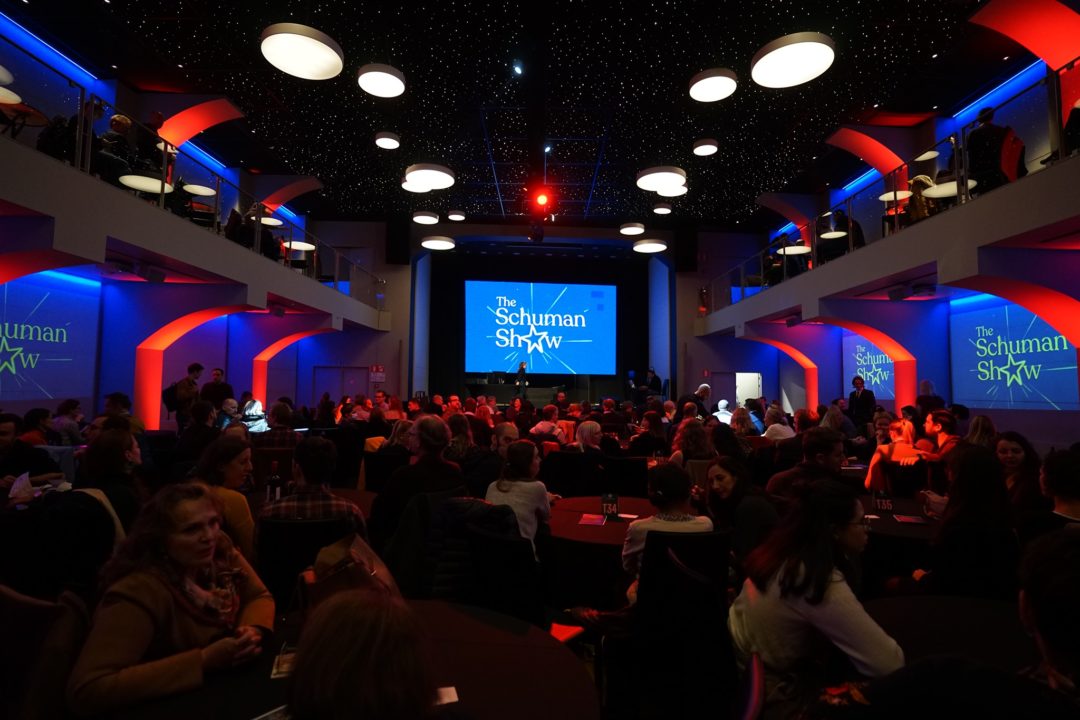 The Schuman Show live on stage in November 2021

The name of your show is a nod to a well-known film in which the main character unknowingly features in a reality TV show. Are you not a secret operation by some EU communication unit which finally thought of a way to communicate things EU to wider audiences?
Haha! If only we would get paid as such! But it is true, we do think that EU communication is a failure. But we are not here to defend the European Commission or the European Parliament. We are here to tell what is going on, whatever the cause is and whomever is to blame. In a funny way!

Your live-shows take place in Brussels though, how will you bring the show to those parts of Europe which are not Brussels?
From the beginning our aim has been to go online, where the public is. The show in Brussels is just a starter. The next big step would be to produce more and more online content, like video’s or snappy tweets, and spread those by online media channels like youtube and facebook.

Many of the jokes in the show we attended were great fun for those in the know about Brussels’ manners and mechanisms. Do you expect other Europeans to be as informed as the audiences attending your live-shows?
Certainly not. For the online content, we will aim for a broader audience and we will explain more. Although sometimes even an inside joke you don’t totally get can be both funny and informing.

What do you hope your show will contribute to what our founders called ‘the European sentiment’?
Honestly, we just want the people to become a little more aware and have a laugh. And if that would serve the evolution of an ‘European sentiment’, we see no harm in that either!

What Europe can learn from Eurovision

Who is we? Or: The revolution of fraternity. An exchange with Bas Mesters.