Subscribe to our newsletter
I accept all terms and conditions
There was an error, please try again later
Thank you for subscribing!
The New Gospel Back
Support us

With the first round of our Democracy Needs Imagination call, we were looking for ideas, projects, and experiments that breathe new life into European democracy, in the run-up to the European Parliament elections. One of the granted projects was ‘Il Nuovo Vangelo’, by the International Institute of Political Murder [IIPM].

The IIPM was founded Milo Rau and produces theatre, and films with socially charged-themes, this project was about exploring the role salvation plays in our world today.

The New Gospel entailed an interdisciplinary project [campaigns, public events, performances, and a film] to talk about global human injustices, but rolled out in Matera, one of the two 2019 European Capitals of Culture. The film ‘The New Gospel’ premiered at the Venice International Film Festival 2020. We had a mail interview with Elisa Calosi, production manager, and Giacomo Bisordi, dramaturg. 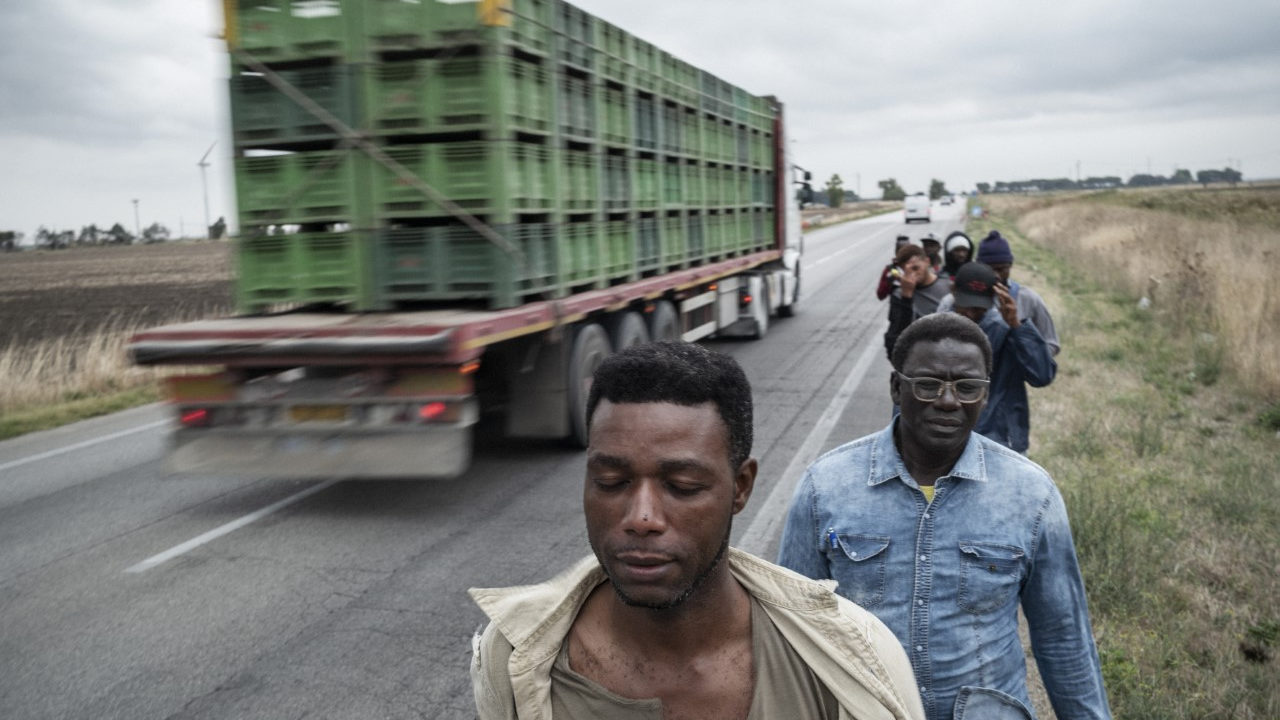 Introduction, or ‘Good to know before reading’:

Even before its’ first screening, the making of the film made headlines. Director Milo Rau wants to address a series of grand questions with the New Gospel: What would the prophet Jesus preach if he were to return in the 21st century? Where would he go, and whom would he choose to be his apostles? In answering these, Rau’s address human injustices.

According to Rau Jesus was a revolutionary who worked as a carpenter on the great construction sites of the Roman Empire. Jesus’ rejection of the global system of exploitation of his time, his revolutionary commitment and his search for new forms of solidarity were the director’s inspiration.

Rau’s Jesus is played by the activist Yvan Sagnet, showing Jesus as a black migrant, the first portrayal of its’ kind. The twelve apostles are migrants working in the fields and living in the ghettos of Southern Italy, activists and small scale farmers. After Jesus’ crucifixion in Matera – and the resurrection in Rome the new Jesus and his apostles leave for Palermo.

Who is Yvan Sagnet, and why is he the 21st-century prototype of Jesus?

Yvan Sagnet is a political activist. Born in Cameroon, he moved to Italy to study in Turin and initially earned his living as a farmhand. In 2011 he revolted against the system of exploitation and organised the first migrants farm workers’ strike in southern Italy. The strike led to the introduction of “caporalato” (mafia-led exploitation of workers) as a crime and to the first trial in Europe for slavery and the conviction of twelve entrepreneurs. Sagnet worked as a trade unionist and is today one of the founders of the international anti-Caporalato association NO-CAP. And this was the exact profile needed to re-enact what Jesus made in his times: as Jesus, in its time, as a social-revolutionary, sought his group of apostles to build a revolt against the Roman Empire, Yvan Sagnet in The New Gospel planned a new revolt to give voice to those who hadn’t one. Therefore he went across the largest of the wild refugee camps, the so-called “ghettos” in Italy and among the “wretched” of southern Italy, the refugees and migrants as well the small farmers brought to bankrupt by an unfair agricultural production chain, former trade unionist, local organisations – such Casa Sankara in San Severo – and local representative of the catholic church, activists of any religious belief, he has found his “disciples” to lead at his side the “Revolt of Dignity”.

In interviews on the film, we read that this movie is about the Revolt of Dignity? What is that, and how would a film contribute to it?

At the end of the film we discover that the first “House of Dignity” has been founded, close to Matera: “Casa Betania”, a collaboration between different local partners – Casa Sankara, No Cap, the Italian Church -, is a house where the previously homeless participants of the film can now live in dignity and self-determination, working for local farms, with a legal contract. And this is one of the results of The Revolt of Dignity, a political campaign and the true core of the movie. That’s a struggle for the rights of the people disenfranchised by the current Italian and EU migration policies – over 500,000 people in Italy alone. To build this campaign Yvan Sagnet, together with the apostles, local small farmers and activists, created a six points Manifesto that declares the freedom of movement, the right to humane working conditions and fair wages without any discrimination, the right of an adequate housing, the object to the consumption of goods which is based on human exploitation, food production as not for profit but for the common good of present and future generations. It’s through the Revolt of Dignity, that The New Gospel brought the attention of the audience to a situation that, albeit located in one of the main EU countries, is mainly invisible. This, in an attempt to highlight the role that each of us plays in the global economy.

The movie is largely recorded in Matera, 2019 European Capital of Culture, but there are more reasons for it to be filmed there, right?

True. As always, an interdisciplinary project such as The New Gospel went through various phases. Milo Rau was invited in 2017 by Francesca Lisbona (Teatri Uniti di Basilicata – one of the local organisations partner of Matera 2019) to prepare a project that could fully involve the Matera citizenship to the events scheduled for 2019. But next to its role as ECoC, Matera had been also the place where many biblical films were shot, first of all, The Gospel According to St. Matthew by Pier Paolo Pasolini and The Passion of Christ by Mel Gibson. This led initially to a simple move: let’s make a new Jesus movie for the XXI° century. A movie that could merge the Christian Myth, its cinematographic tradition set in Matera, and the entire citizenship of the Matera region. But this was only the first step. The next, and more important, was to ask ourselves: who could be Jesus today? Which kind of Revolt could he lead today? For which he would stand for? And last but not least, what if this Jesus and his group would invade and clash with the Matera European Capital of Culture?

Therefore, besides those first elements what is the symbolical function of Matera for Europe in the context of The New Gospel?

As many will know, Matera has developed extremely quickly in the past 50 years : from the shame of Italy – as it was defined by Alcide de Gasperi in the early ‘50 for its inhuman living conditions – to be entitled Unesco Cultural Heritage in 1993 and then European Capital of Culture in 2019. If we stick to this, we could see only a great, magnificent, development. Definitely, the year of ECoC and the process of preparation to it has supported the development of fruitful projects and collaborations, a sensitive civil engagement spread among the entire citizenship. But the progress made by the city is in complete contradiction with the reality that can be found in the peripheral areas, neighbour cities and fields, where an entire system of exploitation rules the entire region, with thousands of refugees being enslaved in the tomatoes and oranges collection and being forced to live in inhuman conditions in the infamous “ghettos”. This is what brought Rau and the entire team to the fundamental choice that no Jesus movie could be told today without including this contradictory reality. And this is what we try to show with the film, the contradictions of our time, for which Matera and South Italy stand as a powerful metaphor, and, most importantly, which concrete politics can be created to deal and try to solve them.

While filming audiences were welcome. For Milo Rau beliefs theatre is not a product but a process to which the general public must have access. But are those cultural tourists, city-hopping European cultural capitals, not part of the problem rather than of the solution?

As it has been said for the ending of the movie with the foundation of Casa Betania, the entire project of The New Gospel focuses on its own sustainability. Nevertheless, like in the other play and movie by Rau, the process is what really matters. This means that the involvement of the audience is part of the process too. We could say that promoting the awareness of which role in the problem the cultural tourists play is a way also to make them becoming part of the solution.

How do you keep in contact with many of your protagonists and what did they think of the film?

Parallel to the movie prèmiere in Venice, we had built a crowdfunding campaign for projects that have been proposed by the activists and organisations involved in the movie. All of these projects are linked, as said before, to enhance the sustainability of The New Gospel and also to make those who had been protagonists of the film to be also autonomous, in a similar fashion to what happened recently with The Congo Tribunal who had seen a new trial completely self-organised by those who had been the protagonist of the first Congo Tribunal movie. Next to this, the contacts with the “apostles” and all the activists are frequently. For example, in the past week, we had seen and followed the development of the Casa Betania activities and searched for possible new Case della Dignità.