Subscribe to our newsletter
I accept all terms and conditions
There was an error, please try again later
Thank you for subscribing!
The Future Is Europe Back
Support us

The Future Is Europe 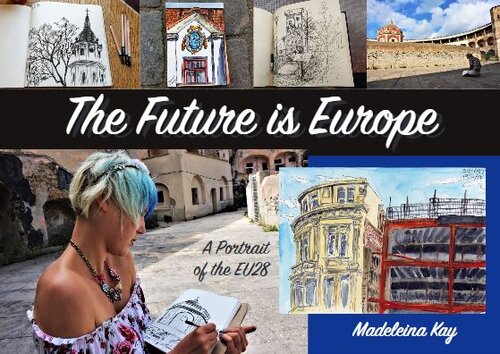 With only a few more days remaining untill Brexit we are happy to share some quotes from the book by our #DemocracyNeedsImagination grantee Madeleina Kay, aka #EUsupergirl. The book accompanies a self produced video which captures her “time wandering the streets of Europe documenting our continent through sketches and photography.” Which “has opened my eyes to the way that public spaces are a forum for political dialogue. Traces of humanity’s conversations are etched on every surface: blank walls are a canvas for illegal graffiti or officially designated for murals, lamp-posts and signs become plastered with stickers, signs are left in windows, messages written on the pavements, street furniture colourfully decorated, installations exhibited in the streets. The cities’ artists and activists raise social and political issues, often promoting events, brands or ideas.”

She quotes our president of the board HRH Princess Laurentien of the Netherlands: “That is precisely the role of artists and cultural change makers. They personify and create the space that pushes us to imagine new ideas and possibilities. They are well aware of the discomfort they create by challenging the status quo, to the point of being labelled ‘naïve’, ‘irrelevant’, ‘political’ or worse, ‘extremist’. But it’s their independence of mind that drives them.”