The Europe Challenge: A day in the life of intercultural mediators at AZ Sint-Lucas in Ghent Back

The Europe Challenge: A day in the life of intercultural mediators at AZ Sint-Lucas in Ghent

Europe today faces great challenges: How can Europe respond to social, economic and climate crises, especially as it rebuilds after the arrival of the pandemic? If we are to answer these and other questions, Europe’s citizens must lead the response. While solutions will be local, they will often work for communities everywhere.

Wherever you are in Europe, libraries play the same vital roles. Open to everyone, they are centres of learning, places to meet, spaces for reflection, at the heart of communities. No other institution is so local, yet so universally welcoming and recognisable to us all.

The Europe Challenge recognises that our libraries have a unique role in helping communities to meet the challenges of where we live, challenges that are common across our continent.

From time to time we update with stories from the ground. Here’s one from Ghent, Belgium, originally published on the site of Comon – a collective of academics, scientists and creatives from the city of Ghent, imec, University Ghent en De Krook Library. They collaborate to make Ghent a better, more pleasant and smarter city. With science and technology as parts of the solution. And together with all of Ghent’s inhabitants.

Comon works together with Avansa regio Gent and Urgent.fm and is financially supported by European Cultural Foundation and King Baudoin Foundation. 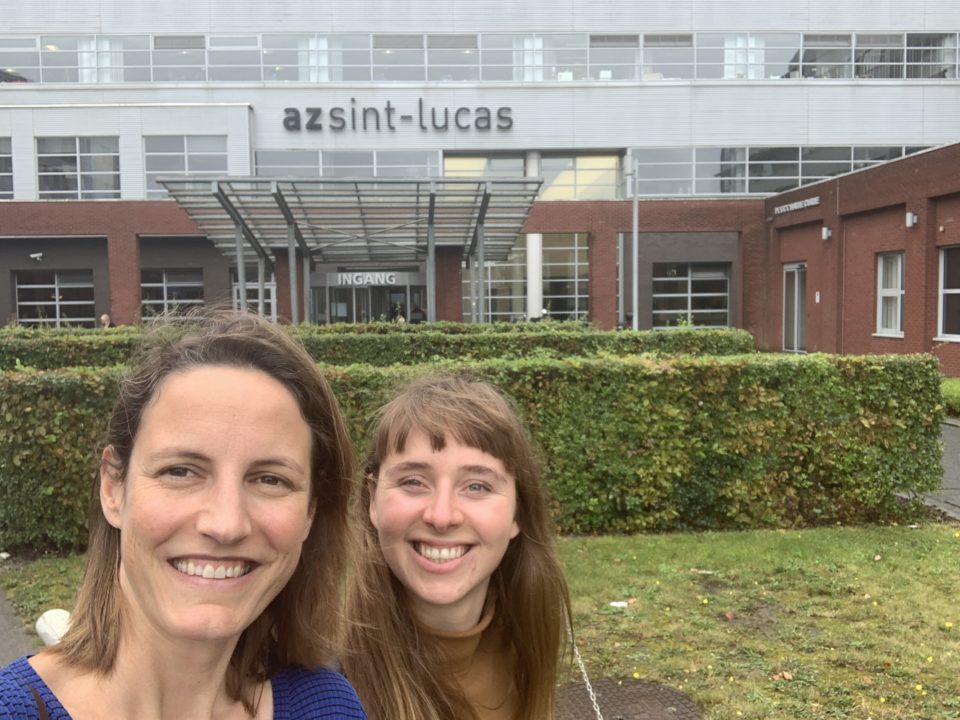 What do you do when you spend an entire year working on the future of health? Exactly, first you take a deep dive into the topic. What solutions already exist? Who is doing what and what drives them? You immerse yourself into the subject and spend time shadowing the people who are already doing it, day in and day out.

Line and Pauline will spend the day in the field with the intercultural mediators at AZ Sint-Lucas in Ghent. They act as interpreters between doctor and patient for people who do not speak Dutch fluently. And they do so much more than that.

Intercultural mediators, say what?
Intercultural mediators translate between doctor and patient. Most hospitals in Ghent have one or more on staff. They’re usually called in at the patient’s request. Interpreting isn’t the only thing they do. They also provide emotional and administrative support to the patient. And when the communication between doctor and patient has really broken down, they act as conflict mediators. Fortunately, this doesn’t happen that often.

At AZ Sint-Lucas, patients have access to Turkish, Bulgarian, Arabic, and Russian interpreters. For other languages, the mediators call on In-Gent vzw or one of more than 200 virtual video interpreters across Belgium.

People really look up to their doctors in Turkish culture. That often means they’re more hesitant to ask questions if they don’t understand something. Another example: in some cultures, nodding “no” means you’re actually saying yes.

Feedback method
That’s the theory. To really experience what it’s like to work as a cultural mediator, we’re given the opportunity to shadow them for the day. It’s an incredibly interesting experience. On thing we learn about is the feedback method. Instead of asking ‘Did you understand?’, you say, ‘Try to explain it to me’.

Shadowing these professionals also proved quite a few of our assumptions wrong. We assumed that pictograms were the solution. But that’s not always true. Some intercultural mediators never even use them.

The importance of clear and simple language is another thing we heard time and again. “We try to convey everything in everyday language. If a doctor uses Latin words, I’ll ask ‘What does that mean? I didn’t understand’. That’s nothing to be ashamed of because we’re not doctors.” What really matters is trust. “Patients feel they can trust us. In the past, they would even come to us for coffee. Those days are over.”

“I admire some doctors”
So trust is key, and not only between patient and doctor. Trust also plays a role in the relationship between the mediator and the doctor. “Their behaviour is sincere and heartfelt, they show a lot of empathy. I admire those doctors. The doctor will call us and ask if we can come in. And if we’re busy at the moment, the doctor will wait for us. Usually, it’s very unusual for a doctor to wait.”

Of course, when you’re shadowing, you’ll also experience things that stick in your mind. This is a good example. A son arrives with his elderly Turkish father for a consultation with the doctor in the hospital. The father has been diagnosed with cancer and doesn’t know yet. His son speaks perfect Dutch and translates for his father, but he doesn’t want to or can’t convey that difficult message. It’s understandable. The doctor wants the patient to know his diagnosis before the operation, so they call in the intercultural mediator. She tells the man in Turkish that he has cancer, and with medication, he may live a few more years. She explains that the operation is necessary and that the doctor needs his approval. Everyone does their best. The doctor takes out a sheet of paper and draws the part of the body where the operation will be done, then sketches out what will happen during the operation. Every effort is made to make it clear to the man what’s in store for him.

Why are you here?
Here’s another example. “Why are you here?” It’s the question a doctor will ask at the start of almost every appointment. But the man sitting in front of the doctor has no idea. He speaks Bulgarian and Turkish interchangeably. The intercultural mediator takes great pains to make the doctor’s words intelligible for the patient, and to communicate back to the doctor what the patient is saying. But it’s clear that language isn’t the only barrier in this conversation. The Turkish man has had this appointment in his diary for several months, so he has faithfully turned up, but it turns out he doesn’t really know why he’s there. He’s supposed to have a check-up. Not long ago, the man spent three months in hospital. The doctor examines the man, listens to his symptoms, and asks what medication he is still taking. The patient can’t answer that last question. He doesn’t know what medication he’s taking. The doctor and intercultural mediator work together to talk with the man – but the problem here isn’t just the language barrier. There are other elements of the “comprehension” problem at play: does the man fully understand what’s happening? It’s something neither the doctor nor the cultural mediator can solve in just one appointment.

Find out more about The Europe Challenge

The Europe Challenge and the future of health