Subscribe to our newsletter
I accept all terms and conditions
There was an error, please try again later
Thank you for subscribing!
“Space is an optical device that helps us to make sense of the present” Back
Support us

In this Featured People interview, we talk to Eyal Weizman, Professor of Spatial and Visual Cultures at Goldsmiths University, London, and founder of Forensic Architecture. This international multidisciplinary research group is one of the 2018 laureates for the ECF Princess Margriet Award for Culture. Drawing on architectural knowledge and using novel technological and aesthetic methods, Forensic Architecture analyses matter to make sense of the ways complex realities are organised and transformed by conflict. 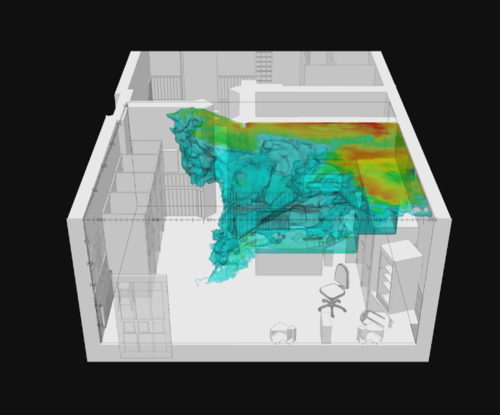 Project 77sqm_926min: Simulation of the fluid dynamics of smell particles (ammonia) within the front room of the internet cafe. Image: Dr. Salvador Navarro-Martinez and Forensic Architecture, 2017

“Over the past decade, I was personally involved in various human rights initiatives, in Israel and Palestine, as well as in several cartographic projects. Architecture was very much seen as an analytical frame through which politics could be analysed. Not politics in the mundane sense of the word, but politics as an act of radical confrontation. I then realised that architecture could become a very unique framework to look at how political forces articulate themselves in the physical world.

At the time, we were focusing on architecture as buildings, but using architectural methods to read political realities as forms of construction. So we read reality architecturally, rather than looking at buildings per se. The result of that project was something that colleagues and myself referred to as ‘counter-cartography’. If the map of cartography is used as an instrument of domination, then in a counter-cartography way, it can also be used to expose this reality and resist it. Forensic architecture is like counter-cartography accelerated. In a very zoomed-in way, it could start capturing moments of eruptive violence that cartography could not. The moments in which the slow violence of planning and architecture, the slow transformation of the terrain that favours one ethnopolitical group, erupts into an incident.

So forensic architecture really had to emerge as a sort of counter-forensic practice to respond to several challenges of the present. These are connected with the proliferation of first-hand testimonies recorded on digital media and satellite imagery, etc. As a civil society organisation, we have the capacity to really use space as an optical device to helps us synchronise and make sense of this flood of signals and images that proliferates in the public domain today.”

“Forensics operates across three domains. The first domain is the field where a crime has taken place – so the scene of a crime. The second is the lab, or in our context here, the studio. The third is the forum where it is presented. The notion of forensic aesthetics operates slightly differently in each one of those domains. Aesthetics is that which pertains to the senses. That which could be perceived by sight, smell, hearing, etc. A forensic aesthetic is a certain heightening of our ability to perceive.

This hypersensitivity enables us to register an event though a general sensorium. We prefer to use sensorium instead of referring to the five classical senses because sometimes they are mixed – for example, vision and sound flow into each other.

This notion of aesthetics is also in the object itself. An object in the world, organised as various types of material surfaces, responds to other material surfaces. How it responds is registered. If I put a hot cup of tea on a table with a Formica surface, the molecular composition of the material reacts. When I remove the cup, you see how the material has expanded slightly, leaving a ring. We can read backwards. We can read the surface of the table as a photograph of the proximity of the tea to the table. It’s the material of the table that holds that relationship. With our technology and perception, we make the material hyper-aesthetic, hyper-sensitive to the surrounding phenomena.” 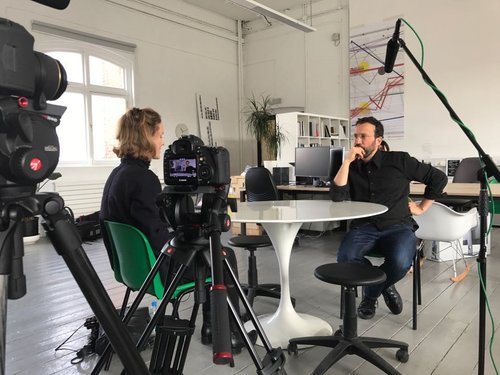 Much of the sensing that you do in your investigations is remote. Many of the places you investigate are under siege or impossible to access. What you work with is often a representation, rather than the actual direct building, the material or object itself. What role does architecture play in this?

Sometimes we can’t get close. A site could be cordoned off, for instance. In that case, something from inside that site needs to communicate itself outwards. This can happen in different ways. You have people remembering things and giving you their testimony. Sometimes you have leaks.

Project The Left-to-Die Boat: Still from the video interview with survivor Dan Haile Gebre, conducted by Lorenzo Pezzani and Charles Heller, Milan, 21 December 2011. In this still, we see an early sketch of the chain of events map being used to help Gebre recall the events. Image: Forensic Oceanography, 2011

Several of Forensic Architecture’s cases have investigated crimes in Europe and have looked critically, for example, at border policies in the European Union. Why?

“In Europe, people tend to think of human rights violation as something that happens out there… in the Middle East, in South or Central America. It’s not something that happens at home. It has become very important for us to bring our methods and our focus back to Europe, to look at the present, difficult issues that Europe has to deal with. Issues of migration, for instance, issues of racism, issues of violence against migrants and refugees that happen here, in Europe, as issues of human rights. This is a major line of focus for us right now. This is about what Europe is and how we understand what it means to be European today.”

This is an abbreviated version of a longer interview. The full version will be available here in May 2018.