Subscribe to our newsletter
I accept all terms and conditions
There was an error, please try again later
Thank you for subscribing!
Measuring the Gap Back
Support us 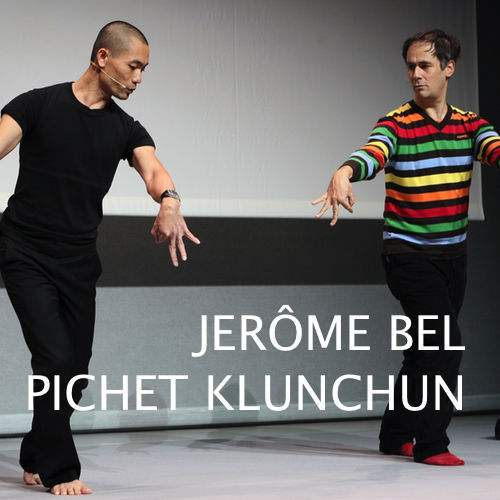 The Art Nouveau-styled Ultieme Hallucinatie provides the setting for my interview-lunch with Routes laureates Jérôme Bel and Pichet Klunchun. And with its slightly hallucinatory atmosphere, it feels right that it should take place here: a conversation with Bel and Klunchun isn’t like an everyday chat.

If the dancer-choreographers are feeling nervous about this evening’s award ceremony, in which they will act out a segment of their performance, ‘Pichet Klunchun and Myself’, then the nerves don’t show. These two are well used to performing. How did it come about that such radically different artists (Bel the French experimenter, Klunchun the Thai traditionalist) performed together at all?

‘I’d been sent to Bangkok as a choreographer from the West,’ explains Bel. ‘In the beginning it looked like domination. But, then, Pichet is also a choreographer.’ Speaking as an artist clearly used to the vagaries of those who fund and commission art, he has no illusions about the meaningfulness of the original brief. ‘Really, it’s stupid to send someone for ten days to a different country and expect them to do a show.’ Klunchun smiles at the memory of how, in those early days, he would avoid meetings with Bel, while the Frenchman recalls that his attitude to these disappearing acts was: ‘Great! I get to explore Bangkok.’ But, as trust and interest developed, each soon found himself warming to the other’s company, and the collaboration took off.

The performance passed without much fanfare. So they were bemused to hear later from a festival director who wanted to re-stage it. Bel explains: ‘We thought: There’s nothing artistic about it at all, and said “No”. But then we tried it out in the smallest theatre in Brussels. Then other festival directors began to invite us to perform too. One of the festivals featured an exhibition about Thailand, so we agreed to perform it in that. But how would we frame it? As a lecture? A conference? If we’d billed it as a lecture, we would only have attracted 19 people!’

They needn’t have worried. An audience of around 400 turned up on the day, and even more invitations to perform followed. Clearly, their East-meets-West dance-dialogue was striking a chord. As the show crossed continents, it wasn’t necessarily the same chord being struck everywhere. Bel recollects the hostile reaction of an audience in Indonesia – with the hostility being directed specifically at himself (‘They weren’t exactly booing me, but….’). Why was this? Perhaps it had something to do with Bel’s more carefree attitude when outside Europe, where he didn’t feel his reputation preceded him – or would be badly affected either. ‘I thought, No shame for me here,’ he admits. Klunchun, though, sees the audience’s reaction as symptomatic of the extreme seriousness with which Indonesians regard dance. ‘There it is linked to belief, to social acceptance. Dance in

Indonesia is very alive, very important. After a performance, the audience reflects on its

If they had to generalise, they would say that Asian audiences already know classical dance well and want to know what a contemporary dance piece is, while audiences in the West are attracted to traditional Thai dance because of its exoticism. The disparity in audience response is a point on which Bel is adamant, scorning the popular belief that dance represents a universal language. ‘Dance is a language,’ he says, ‘but you need to know the codes to read it. In the West, society has lost the meaning of its dance. Here I am supposed to create my own language, so of course the audience doesn’t understand it. A lot of Western artists say: “Let’s unify!” That’s a mistake. Better to perform the differences.’

Challenged to explain this enigmatic remark, Bel invokes a homely comparison between

the intercultural, the domestic, and the artistic. ‘Sometimes Pichet says things and I think, “This guy is totally different from me.” But you know, there’s also a gap between me and my girlfriend, between me and my daughter. Theatre is about a gap: the one that exists between the stage and the audience.’

According to Bel, the artist’s task in such intercultural performances is to ‘measure the gap’. But is the gap as wide after several shared performances as it was at the beginning? On a personal level, clearly not. Both speak in glowing terms of the trust that has developed between them. Trust is an integral part of the performance itself, as Klunchun describes: ‘It changes every night. We improvise within a framework, which is possible only if you trust each other. Trust had to develop. The performances over time embody the theme of the piece.’

This level of trust means that rehearsals are not needed. They feel secure enough to stray into new territory at times (aided, on occasion, by simultaneous translation, since the unscripted nature of the performances rules out the use of subtitles). Bel maintains that they now have enough material to put on a six-hour performance if they wanted to. ‘Six! No,’ laughs Klunchun. Even this small exchange gives an insight into the dynamic of the partnership: Bel expansive, while Klunchun prefers to remain tight-lipped – as he freely admits. ‘Jerome likes to talk. I prefer to shut up, to wear a mask,’ he says. ‘This piece can make me feel more exposed.’

Being the first recipients of the Princess Margriet Routes Award is bound to bring positive exposure to the pair. Bel says he normally feels sceptical about awards, but that, once he discovered Stuart Hall was also being honoured, he couldn’t resist this one. Klunchun already has plans to plough his share of the money into a production that will attempt to recreate a Thai-inspired dance by the great Nijinsky, based only on some photographs of the original performance. Bel is fascinated, and the talk turns animatedly to the possibilities of this new piece….