Ivan Krastev in conversation with Philipp Dietachmair – Part 3 Back

Read Part 1: Looking Back → and Part 2: Identity Politics →
A print-friendly version of the complete conversation is available for download (PDF) 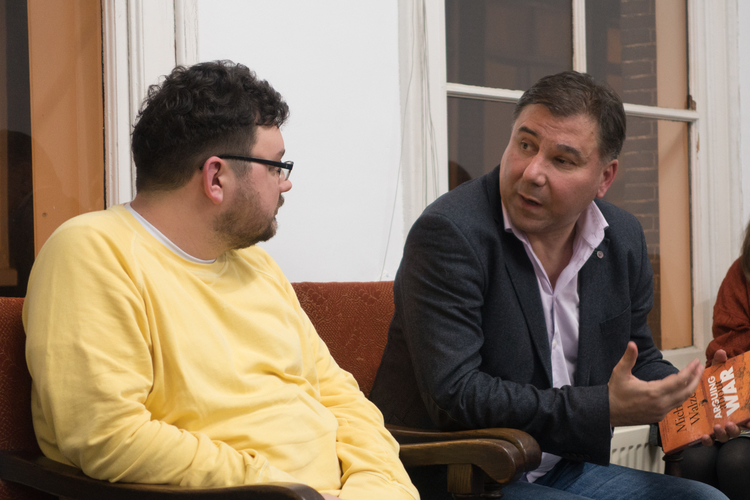 Ivan Krastev and Mykhailo Glubokyi (Izolyatsia) at a panel about Ukraine in Amsterdam, 2015.

We continue our conversation with Ivan Krastev in this third instalment of a five-part interview. After we looked back at what the past 15 years have meant for the building of democratic European communities in part 1, and dove into the issues around the real division between people within our societies across the continent in part 2, we look at the similarities of the many issues across our geographies, through concrete examples from Hungary and Ukraine, and we examine empathy and its possible role in solving many issues.

We also invite our readers to join the dedicated ‘Another Europe’ Lab on ECF Labs where you can participate to the discussion on issues around these particular themes and download more texts on our work in the EU Neighbourhood as featured in our most recent publication Another Europe.

Part 3 – A Common Ground across Geographies

We have a very concrete challenge in this direction ahead with our annual award, the ECF Princess Margriet Award for Culture. This year’s laureates are citizen laboratory for digital culture Medialab-Prado (Madrid, Spain) and theatre-makers and community developers Krétakör (Budapest, Hungary). They have been chosen for their exceptional bodies of artistic and cultural work in developing critical spaces of social participation and political experimentation through culture. In the case of Hungary especially, many within the cultural community and in the country are sceptical about cultural initiatives such as giving this award. How do you think cultural organisations can better formulate or present their activities to actually reach people who don’t even want to hear about the European project, who don’t believe in it anymore –or maybe never have? Also in the light of presenting the Award to the laureates in Amsterdam, in front of an audience that most likely thinks more or less like us already.

You could start by organising a performance by the collective as well as a debate tackling these issues by inviting theatre critics and the general public, so that the Amsterdam audience can experience the profound division we see within the Hungarian society. The biggest political mistake we can all make now is trying to attribute all types of regressive policies simply to decisions allegedly taken by one person, be it Viktor Órban or Jarosław Kaczyński. These people represent certain general trends in their societies. The same goes for the arts: part of the new censorship does not come simply from the government but stems from the pressure that you hear from below. This was also very clear in the case of Russia. I have been talking to a lot of Russian friends of mine, some of them with a strong dissident experience in the Soviet period, who were telling me that things became worse than in Soviet times after Crimea. In Soviet Russia, the government could be after you, but not the ordinary people –if they were not on your side, they didn’t care at least. Now, pressure comes not only from the government, but also from a highly nationalistic, agitated public. It is one thing to be attacked by the cultural department of the communist party, it becomes a totally different story when the porter you know from your own house starts to question your allegiance to your country because of something you said.

Another thing you could do with the Hungarian laureates is to organise the same type of debate and performance you do in Amsterdam in Hungary. That way, the Hungarian audience can understand how foreigners see what is happening in their country, and that this perspective goes beyond liking or not liking Hungarians or blaming their country. We are afraid because we don’t want our own societies to be treated like this. I do believe that bringing the conversation over there is going to make it much more interesting because one of the things in Hungary which I personally find very dangerous, is that in this period of political polarization, everybody starts to live in a ghetto of their own. So we are not talking to the other side anymore. It is not going to be a pleasant talk nor an easy conversation, but this is why it should happen on the level of culture. 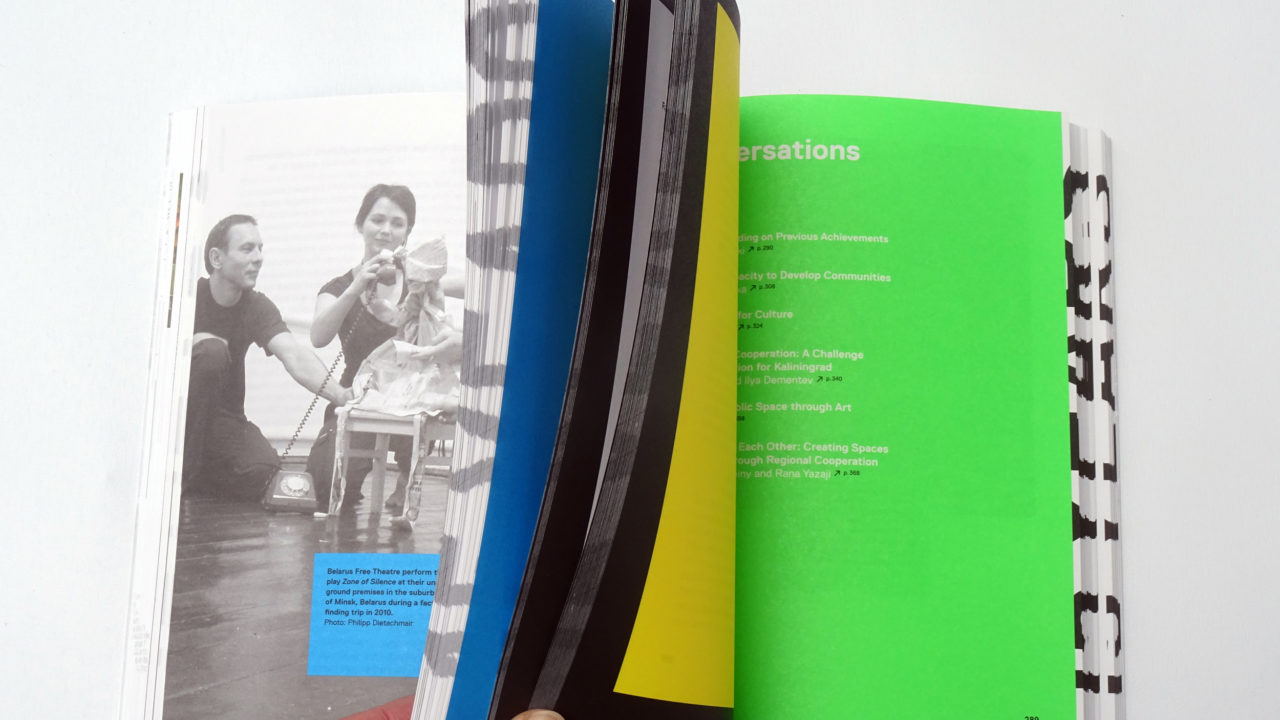 Read articles from the book Another Europe, published weekly on the dedicated Lab Another Europe - Samizdat. Design and photo by Gerlinde Schuller (The World as Flatland)

Would we not always face the risk that our invitation to such a conversation would be ignored – simply because the ECF Princess Margriet Award for Culture comes from Amsterdam and is a European award?

If they ignore your invitation, it is their problem. But you invited them, and I do believe this would be an important step. In places such as Hungary and Poland, there is a very dangerous collective political trend, although Poland still has a big constituency that defends liberal principles that are important to them. In Hungary, the opposition too quickly jumped towards Brussels to solve their political problems, which resulted in losing parts of their constituency.

Again, we have to be slightly more interested in the cultural productions coming from the more conservative milieus. Not simply because some of them could actually be good art, they really always could be. But it’s very important for us to understand that sometimes we actually might not be talking about simple propaganda, but about genuine and earnest emotions that real art comes from. Remember this hysterical discussion in France about Michel Houellebecq’s book Submission? It is an important discussion. It is not about liking or disliking something. What is essentially important however, is to understand how the critics of this liberal and open Europe throw themselves into these debates, why they feel this way.

In my view, opening up for a broader understanding could also be of great value for cultural practice itself, because when you’re stuck in your own environment, you tend to make the walks of life much less complex than they actually are. For example, let’s look at Ukraine where an interesting cultural change takes place on all levels. You obviously have a new nation in the making, and as a result of it, like in any nation building, you have a lot of highly nationalistic rhetoric. How should we look at this? We’re not talking about fascism but can clearly see that parts of Ukrainian propaganda are not very different from the Russian one. Should we see this as something natural? How does it fit to the way most other parts of Europe feel? Can we really expect Ukrainians to talk the way Germans do by now, sixty or seventy years after what happened in Germany? On the other hand, if we are very tolerant towards nationalistic Ukrainian rhetoric , how critical could we possibly be towards others in Europe who use similar language? Including Russians. I really do believe we need to have these critical conversations: We quickly like to call something propaganda, but nobody ever believes that they are actually doing propaganda themselves. It’s the first rule in propaganda: you always believe that you are doing counter-propaganda and the actual propaganda comes from the other side. This is why culture matters.

In her book Inventing Human Rights, French historian and academic Lynn Hunt analyses the birth of human rights by looking at cultural artefacts such as the opera and the novel in the eighteenth century. According to her, the birth of the idea of the universal man and of universal rights goes hand in hand with the epistolary novel of the eighteenth century: for the first time, a countess reading a novel could feel empathy and identify herself with the love and feelings of a maid. The same goes the other way around, for the maid who reads about the romantic misfortunes of the queen. This is how they discover their common humanity.[1]

We all feel vulnerable in the world, it is therefore very important that culture allows people to talk through their insecurities and vulnerabilities, without letting each side become either a censor or a preacher. Some fears, such as the fears connected to radical Islam, are genuine and legitimate. The problem is that many of the demands voiced by people who have these fears would make our societies even more vulnerable. Nevertheless, in order to have a conversation, we need to acknowledge the genuineness of their fears. On the other hand, however, when people in places like Russia and elsewhere, start expressing their negative feelings about gay rights or hostility towards other issues, sure, let them articulate themselves, but then let’s please also remind them: “It could be your own son you are talking about … .”

I recently heard a very sophisticated explanation used by an NGO in Russia that works with autistic children. They are basically trying to convince the parents to take better care of their kids and to keep them with them at home by using the following elaborate argument: If today you as a parent are telling your kid who is in this difficult condition that you cannot keep him or her at your home, cannot take care of your own child because it is too problematic and that you are going to dump it in an institution, don’t forget that the other kids in your family are watching you while doing this. So don’t be surprised if tomorrow your children are not going to be interested in taking care of their old parents.

Empathy is critically important, and only culture can breed empathy.

[1] Editor’s note: also look at Thomas Poell’s review of Hunt’s book where he confirms that “the growth of new forms of empathy established the basis for the articulation of a whole set of human rights demands.” http://www.krisis.eu/content/2008-3/2008-3-05-poell.pdf

In part 4, we discuss if and how culture can build a new language to create the links between people.

JOIN THE CONVERSATION ON THE ANOTHER EUROPE-SAMIZDAT LAB

Another Europe: The Book