Subscribe to our newsletter
I accept all terms and conditions
There was an error, please try again later
Thank you for subscribing!
Democracy Needs Imagination: Voulez-vous voter avec moi? Back
Support us 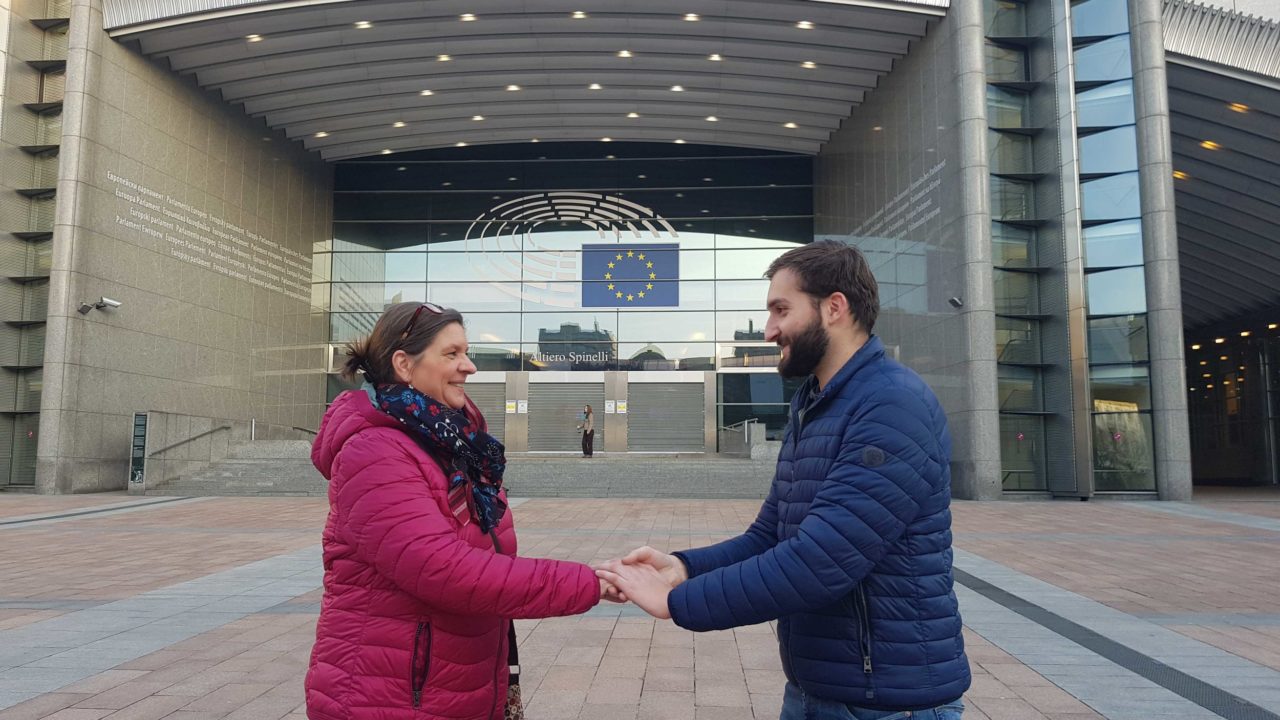 What do citizen assemblies, billboard designs, engagement rings and young journalists all have in common? They all fight for a more democratic Europe in which everyone values and uses their right to vote. From grassroots campaigns on social media to powerful established media platforms, we introduce to you a few of the projects selected for our Action Grants.

Wow, what an overwhelming number of proposals we have received in a matter of weeks! Actions that address the negative discourse in and on Europe in provocative and imaginative ways. Here, you see some of the granted actions to our call Democracy Needs Imagination. Check out creative and challenging projects that can breathe life into Europe and democracy! Find out more about the grants scheme here.

From schools to chatrooms: We need to listen to each other

Europe is becoming more and more polarized. So many people have so many opinions. But do we ever really listen to each other?

Do you know what the French truck-driver who joined the yellow-vests actually thinks? Why do Polish people vote for PiS and Hungarians support Viktor Orbán? Do some Brits regret their Brexit-vote?

One way to find out why things happen as they do in Europe today, is to actually find someone who has a totally different opinion and listen to them. Debate your point of view, exchange your ideas with someone you would never sit down with in daily life.

That’s why die Zeit Online has joined forces with other European media outlets to launch Europe Talks, a platform to bring together people with divergent political views from across Europe for face-to-face debates. Until the European Parliament elections in May, you can take a small online quiz which includes seven politically controversial yes-or-no questions. Should all European countries reintroduce strict national border controls? Should rich European countries support those states that are less well-off? The system matches you with another European from a neighbouring country – who has answered the questions in the completely opposite way. 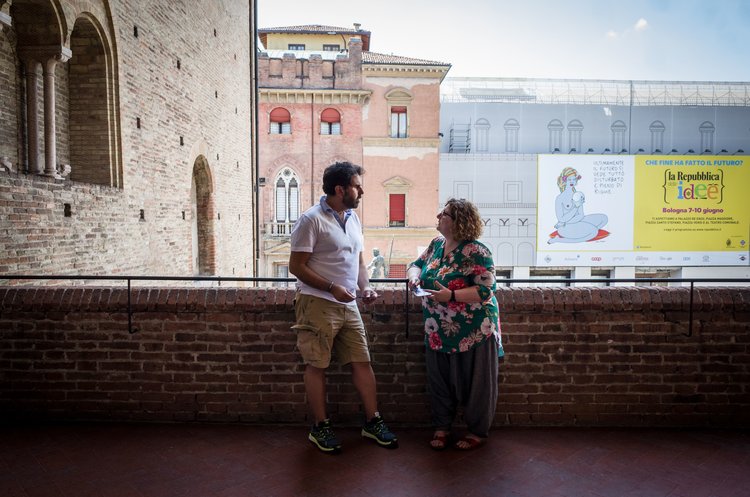 In mid-April, readers will be introduced to their debate partners. They can get in touch and meet online or in person at the big EuropeTalks festival in Brussels, where everyone’s opinion is heard.

Another project that encourages debate between different Europeans is A pen for Europe to ACT, REACT, IMPACT! with TV channel RTBF. For this Belgian project, young people between the ages of 12-25 years take on the role of young reporters. They go into the street, their schools and universities, and visit events, to meet and talk to different citizens from all sorts of backgrounds.

They enter into dialogue with citizens about the major topics of the European Parliamentary elections 2019: from societal issues to decision affecting the daily life of European citizens. Think issues high on the agenda like climate change, reception and management of migrants, and the rise of extremism.

The project is executed through nationwide media as well as a dedicated app. Young people are engaging in dialogue about the topics of our time, making their voices and those of others heard, by producing creative content for nationwide public radio and television.

Power to the People

“Voting is both a right and a civic responsibility. We give a voice to Turkish Cypriots wishing to exercise this right and encourage others to do so, reminding them their responsibility.” — Derya Beyatli of Yenidüzen.

Listening to each other is the first step. What’s next? Educating people on their rights to vote and cast their opinion on how a future Europe could and should function. 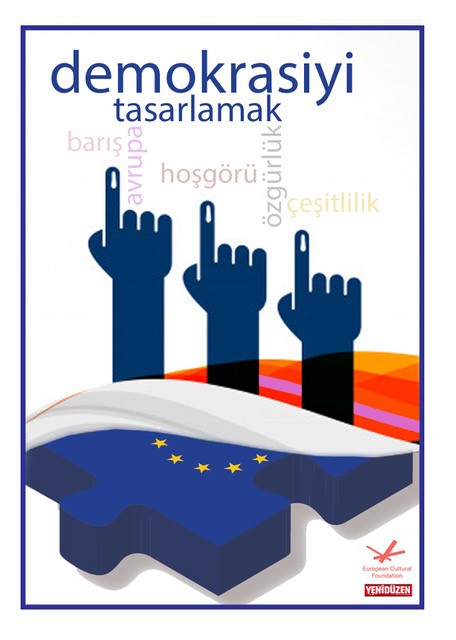 This is especially crucial in areas with extremely low voter-turnout. Participation in the European Parliament elections is low among Turkish Cypriots. In the last elections, only 3% of the people executed their right to vote. This is rooted in a strong nationalistic, anti-European lobby, labelling European voters as traitors. Bureaucratic difficulties add to the low turnout.

YENİDÜZEN is a newspaper published in Northern Cyprus since 1975. Their mission is to provide truthful and unbiased information to the Turkish Cypriot community and to contribute to the democratic development of society. Their project Designing Democracy promotes democracy in Cyprus through a design competition and voter education in the form of media coverage and a help-desk.

A help-desk answering questions on the European Parliament Elections and a weekly page in YENIDÜZEN newspaper will help voters to make informed decisions. Their design competition invites people to imagine democracy and turn this idea into a banner in order to promote it. The best six designs will be presented on YENIDÜZEN’s website, and the winner’s work will be displayed on billboards in five different cities throughout the last week before the elections. Their ambitions? “We want to three-fold the percentage of voting in the upcoming elections on 26 May 2019” says Derya Beyatli of Yenidüzen.

What could these voters imagine differently?

Meer Democratie, based in the Netherlands, has a pretty concrete vision on this. With their project Now the Citizens, they want to give the voters more direct power in politics. They are experts in creating a more powerful position for citizens in the Dutch political system by lobbying for direct voting of the city majors, and campaigning for their own bill to reintroduce the referendum in the Netherlands.

“There’s disagreement about the right course for the EU, the tasks and competences the EU should or should not have, and how a European democracy could function. We believe there must be a clear vision in these matters and this vision must have support among the population” says Arjen Nijeboer.

Their latest project focuses on creating European Citizen Assemblies that are realistic representation of Europe’s population. These assemblies create solutions and proposals for a more democratic Europe. The results could be translated in various options and presented to the population via multiple-choice “preferendums”.

“Voting is a beautiful thing. Voting is being responsible. We want to celebrate this beautiful act of responsibility across Europe and across borders.” — Paulina Fröhlich, Kleine Fünf

Now, after people have heard each other, have discussed and come up with inventive solutions – how do we actually get Europeans to go to the ballot box this spring?

Paulina Fröhlich came up with an idea that is both effective and playful. Her initiative Kleiner Fünf (below five) realized several campaigns prior to German national and regional elections offering participatory formats highlighting the importance of taking part in politics and campaigning against right-wing populism.

They provide tips and guidelines that can help people to counter populist statements and hate speech in their direct, everyday environment: within families, at work or with friends.

Not only do they effectively educate people through webinars, workshops and educational material. But they encourage people to have a truthful dialogue. They first started out as a campaign to prevent the German rightwing party AfD from begin voted into parliament – which gained them major national attention and support.

Her latest project Proposals for Europe is a playful campaign that lets us fall in love with Europe all over again. Starting from the idea of a marriage proposal, they distribute origami templates that can be folded into engagement rings to political youth organisations and social media influencers all over Europe. Together with paper artists, the team designs the origami template so that after folding the ring, a hashtag with a positive message will be visible on the ring itself. 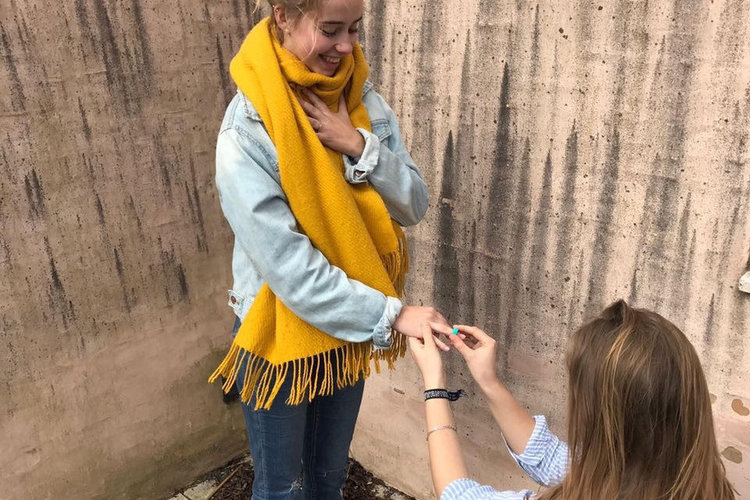 The recipients are asked to propose to a friend with their ring and go vote together. This may result in a “Voulez-vous voter avec moi?” in front of the Eiffel tower, a “Czy chcesz zagłosować razem ze mną?” in Danzig and a “Θέλετε να ψηφίσετε μαζί μου?” on a Greek island.

They are shared on social media, encouraging others to join the movement. This way, the rings not only motivate young people to vote, they turn voting into an act of friendship and remind us of the love story that is Europe.