Subscribe to our newsletter
I accept all terms and conditions
There was an error, please try again later
Thank you for subscribing!
“Culture means solidarity” Back
Support us

In this Featured People interview, we talk to Krzysztof Czyzewski, one of the founders of the Borderland Foundation and Centre. The group is one of the 2018 laureates for the ECF Princess Margriet Award for Culture for their work in Sejny – a small community in North-Eastern Poland close to the Lithuanian border. Revitalising lost memories and building bridges between the past and possible futures plays a central role in Borderland’s work. 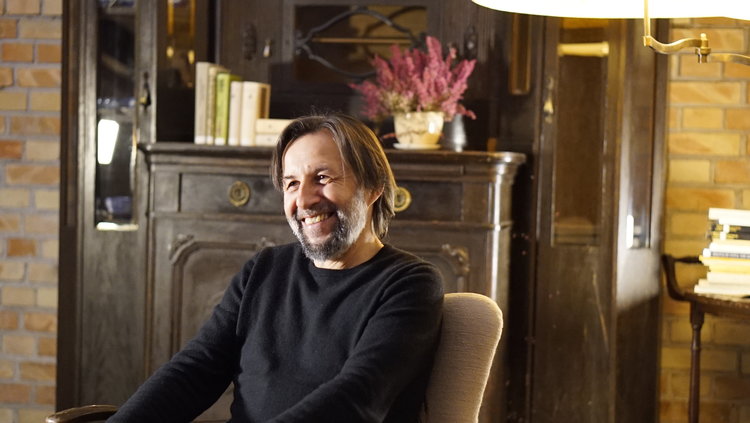 Krzysztof Czyzewski during the interview in March 2018. Photo by Jarosław Wszędybył

Borderland was established in 1990 at an important moment in European history. It was just after the fall of the Berlin Wall and just before the collapse of the Soviet Union. Societal change was imminent. How did dealing with lost memories go hand in hand with defining the contours of a new imagined future?

“Right from the start, from 1989 onwards, we wanted to move forward and build a new country. When we came here to Sejny and to this borderland, we discovered that taking a step forward also meant stepping on ashes, on memories. The ground we were walking on was full of memories, suffering, forgetting…

We decided to slowly, step by step, unearth the memories and rediscover what had happened. Oblivion does not exist in the borderlands. You may claim that you have forgotten but the memory lives on inside you, within the community and in the relations between people. Touching on this network of human relationships meant touching on painful things – things that we, as outsiders, were not aware of. In hindsight I think that made our situation easier. We could view things from a distance without the burden of the past that paralysed the local people.”

How did your approach take shape?

“It takes time to unearth memories and open wounds with the intention of healing them. So we slowly developed our workshop to deal with all these issues, all these memories. Our first gathering took place in the former Jewish synagogue.

We invited people from various minority groups, nationalities, cultures and religions. There were Lithuanians, Russian Old Believers, Ukrainians, Russians, Protestants, Catholics, Greek Catholics, Orthodox people, Roma – all different groups in one circle. It was an emotional moment. For the first time, they were able to meet each other again and share their stories and memories with their neighbours.

During the gathering we invited the children in the community to carry lighted candles between the groups. It was then that we saw how grandparents and children connected. The grandparents were sharing their stories for the first time and the children were hearing something they had never heard before. We realised that this intergenerational approach worked. The young generation are messengers of our work, going to old people and asking for stories, for memories. They transmit this knowledge to us as artists, to use it in a performance or film or any art form that will do justice to the experience.” 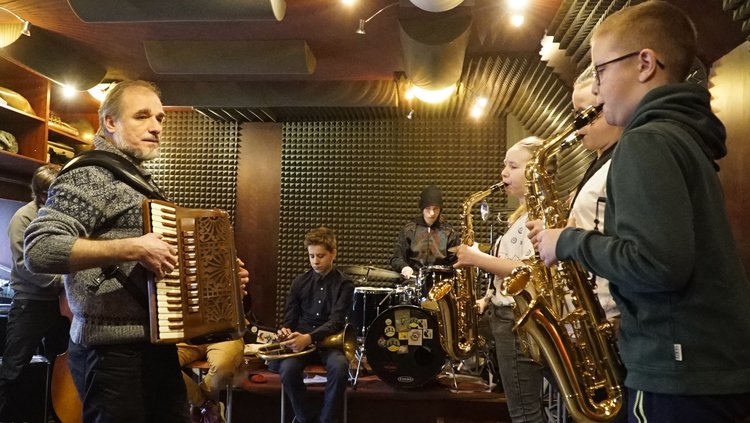 Klezmer Band rehearsals at the Borderland Foundation in March 2018. Photo by Jarosław Wszędybył.

Memory is an incredibly important aspect of Borderland’s work. But working with memory is also a very volatile terrain. We see myriad memory cultures that are lucrative for an experience economy, or even used as a weapon, so to speak, in the “war of cultures”. Yet, Borderland aims to engage in a more nuanced and layered way with memory. What is your approach to working with memory, and how does it differ from a spectacularisation of memory?

“We focus on three types of memories. The first one is critical memory, which is very difficult in the Borderlands. You have to start with your own guilt or bad behaviour, with your own personal battles with your nation, with your group. It builds the trust that makes others open to doing the same.

The second and perhaps most difficult type of memory is the good memory. There is a good memory in every person, but we don’t always have a way of expressing it in our community life. We were working in Mostar in Bosnia just after the [Balkans] war, with the local Muslims and Christians. The young people from Borderland asked them: ‘Did you help your neighbours?’ It was a very emotional moment. These young people were the first to ask them about good behaviour. During the war it had been heroic to harm your neighbour, not help them. But neighbours had of course helped each other in daily life and carried those memories with them as their burden. We developed a workshop to help these good memories to come to the surface.

The third layer of memory is what I call ‘common memory’. Memory is very divided. We all have our own memories. Memories of our district, of our neighbourhood, of our family. But our memories are not the complete memory of the community. Our work focuses on extending these individual memories by embracing the memories of others. To hear other people, to let them speak, even if we may disagree with them. It takes time and sometimes there are struggles and conflicts. But that’s the way to embrace others and that is what the Borderland is all about.” 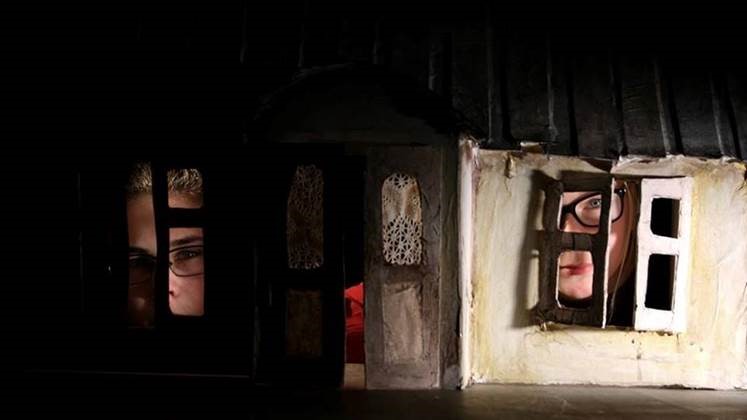 Mysteries of Childhood project by Borderland.

We are currently witnessing a crisis of democracy in Europe. The work of Borderland is ever more timely because it brings the contemporary into dialogue with the complexity of the past, which can’t be reduced to a singular narrative. Is there a specific experience in Borderland’s cultural work that is especially relevant to this?

“From the very beginning of our work, which is very in tune with people at the grassroots level, we have been giving different groups of people room to speak and listening to them. They were telling us 30 years ago, 25 years ago, that our democratic society is in danger when we no longer trust each other. Over the past years the economic transformation and the free market have created new systems. We asked ourselves: do these systems offer room for caring for people or are people getting left behind? 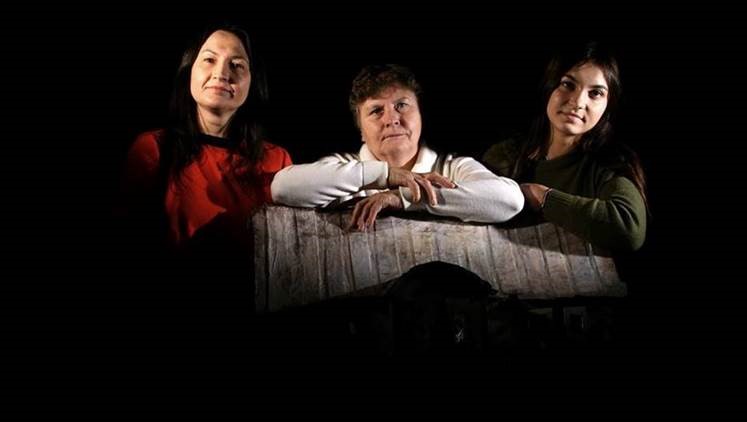 Mysteries of Childhood project by Borderland.

Caring for people, continuously connecting with them, is how I understand culture and education. Get off the stage, step out of the festival and go to the people. The change we need to create in society will not be achieved through an event. It will be achieved through continuous, organic work. We lost sight of this in the 1990s and the 2000s. We shifted towards big events and fireworks, a new life based on consumption. And now we are paying the price for it.

Poles, Hungarians, Romanians – or indeed any other people in Europe – are not intrinsically anti-Semitic or xenophobic. That explanation is too easy. Those of us who are tolerant and liberal feel we are on the right bank of the river and want the others who think differently to join us. But that’s no way to build a bridge! It has to built from both sides and quite frankly, we have done little to meet the others halfway. Fascism, xenophobia and anti-Semitism are not part of the character of people. These ideas are rooted in solitude, abandonment, poverty and many other things.

And remember: no one is born a xenophobe. Something happens to people in life to make them that way and we all carry responsibility for it. I feel we should be much more aware of this and consider how we contribute to it, through the media and our activities.”

What can culture do?

“Culture can help build the bridges to cope with these eruptions of aggression, the xenophobic fears. I used to think that culture was freedom but now culture means solidarity to me. Not the artist as the genius, the creator of all, but seeing the genius in everything and everyone. It’s about encouraging creativity in all, approaching them as creators and partners with whom you can build great things – with whom you can build bridges.”

This is an abbreviated version of a longer interview. The full version will be available here in May 2018.