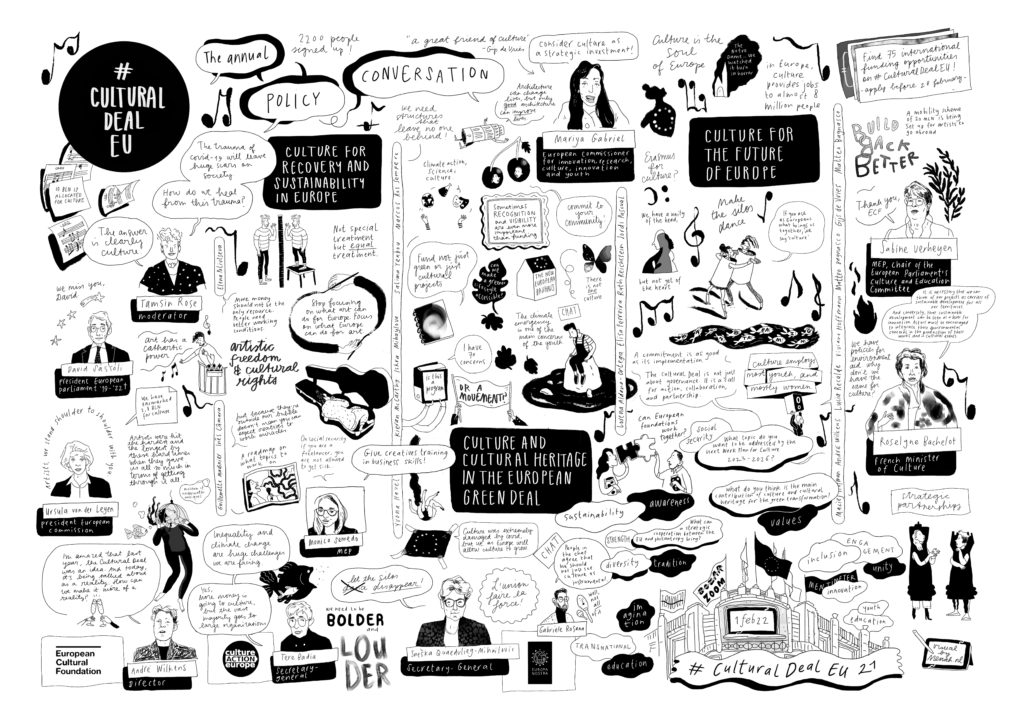 Together with Culture Action Europe (CAE), Europa Nostra, also in its capacity as coordinator of the European Heritage Alliance, and in partnership with the Rebuilding Europe with Culture Campaign and Friends of Europe, we hosted the Annual Policy Conversation, A Cultural Deal for Europe!

This cultural event focused on the contribution of culture and cultural heritage to Europe’s recovery, and to its green, more sustainable and inclusive future through the European Green Deal, the Conference on the Future of Europe and the New European Bauhaus, of which the three hosting organisations are official partners. The aim of this policy conversation was to inspire and engage the wider European community of artists, cultural workers, creative industries and heritage stakeholders in building a future that is more resilient and sustainable for Europe and its citizens.

You can watch recaps of the event in the video playlist below.

Cultural Deal for Europe: Culture for Recovery & Sustainability in Europe

Cultural Deal for Europe: Culture and Cultural Heritage in the European Green Deal

Cultural Deal for Europe: Culture for the Future of Europe

'The Netherlands starts becoming a cultural outsider in Europe'

In an opinion piece in Dutch daily Trouw ECF director André Wilkens claims there can be no recovery after the pandemic without respect for culture and the role of the artist. That 2% of the European Recovery Fund should be allocated to culture – as intended by the European Parliament – could be the start of a creative healing process, at the heart of Europe’s transformation. The Netherlands must not be left out.

In the run up to the Dutch Paradisodebat on the post-pandemic future of the Dutch cultural and creative sectors various Dutch prominent opinion leaders spoke out in favour of the Cultural Deal campaign, urging the Dutch government to dedicate at least two percent of the RFF funds to culture. The open letter is an initiative by the Dutch Europa-platform and is open for endorsement. With financial aid from the national rescue packages stopping per October, the sector needs your support now. Please sign the open letter!

In the days prior and following the Dutch debate on ‘How to make the cultural and creative sectors even better?’ newspapers published stories. Here’s the article from Parool, click here for the report in NRC. The event itself took place on August 29 and was live-streamed. In case you missed it, the video is still available on the site of Kunsten ’92. They also shared a report. Click button below for the report by our advocacy team.

Report on 2% for culture call

A Cultural Deal for Europe: A central place for culture in the EU’s post-pandemic future, event held November 18 2020