Subscribe to our newsletter
I accept all terms and conditions
There was an error, please try again later
Thank you for subscribing!
Courageous Citizens: Nour Abofarraj Back
Support us

In our series of interviews with our 2018 Courageous Citizens research and development grantees we introduce you to Nour Abofarraj. With her project ‘Trace’ she wanted to invite youngsters to real-time events and enable real time encounters between audiences from different religious and regional backgrounds, in Damascus, Syria. This is important, as she wrote in the application because “Many Syrian youngsters are growing up in a challenging and isolated environment, forcing large segments of Syrian youth to live in virtual realities of social media.”

In your own words, what was your idea about?

Trace project is a project that tracks down art’s trace in our lives. At first, the idea was to study the realty of cultural participation in Damascus after the war, and to design an integrated interactive program that activates the interest of a selected sample of the Syrian youth in specific cultural events. But after the actual launching of the project, the project’s team decided to focus on the audience’s relationship with performing physical arts in Damascus, as an example of a specific type of cultural participation. 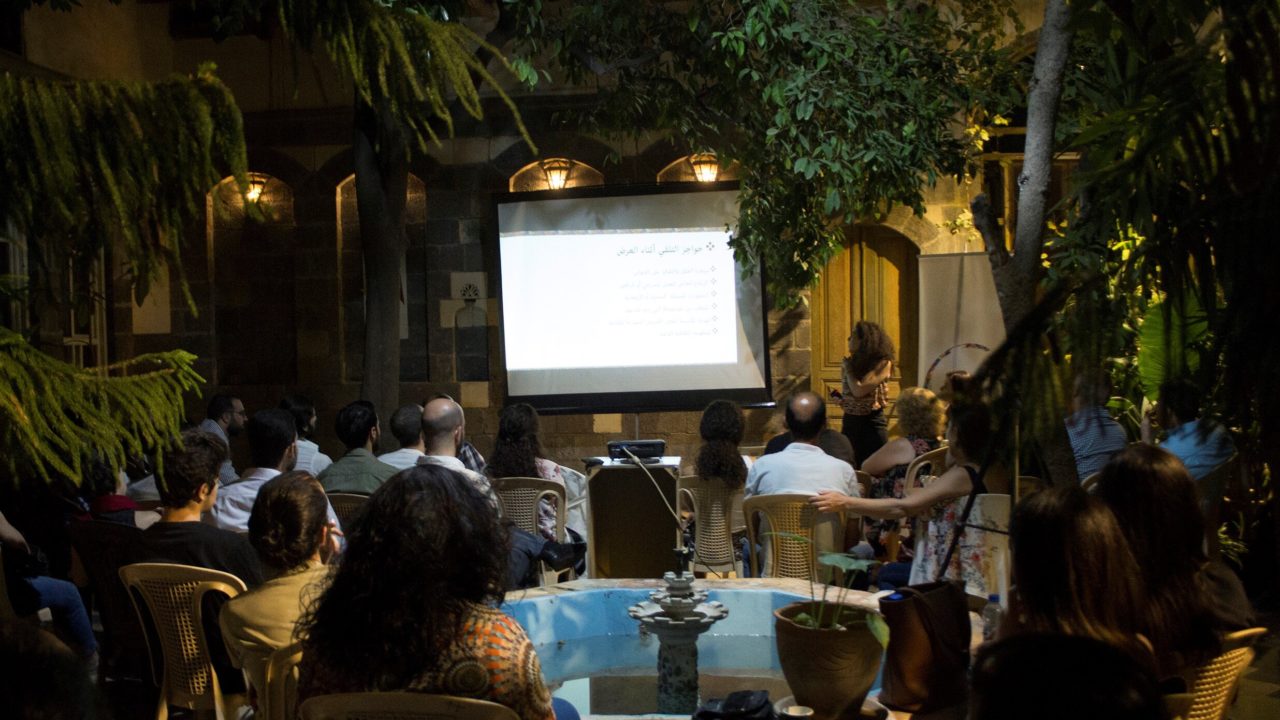 You couldn’t participate in the incubator workshop because of visa trouble. What did you do instead?

It was a great lose for me not be granted a visa to participate in the incubator workshop in Marseille, this had a major impact on the implementation of the project, especially on academic level, since it’s a research and development grant. We, the research team, faced a lot of difficulties in defining the basic research area, tools and methodology. But all these difficulties led us to make decisions based on our assessments of the conditions of the local community and our personal potentials.

What difficulties did you encounter in realizing the first steps of your project? Did you overcome those?

Launching a cultural initiative in Syria with the partnership with an international organization was really challenging step for us. We were concerned that we might be suspended from work, particularly during the implementation phase of the focus discussion groups that was one of our basic research tools. We also faced difficulties in finding enough reliable resources written in Arabic about the theatre audience in Syria since we wanted to tackle down the history of this audience and its characteristics. Surly, we also faced some organizational difficulties given the complex nature of the project with its various parts (media, research, and interactive program), but we managed somehow to overcome these barriers.

In our opinion, the project’s most added value was adopting a completely different new approach in Syria that focuses on the audience, the public, rather than the artists or the cultural actors. This approach delivered from our belief that the value of culture and its resulting events and products can be measured through its effect on society. Therefore, the paper covered completely new areas such as (the characteristics of the Syrian audience, spectatorship traditions of the Syrian audience, and the feedback channels between the artist and his audience).

This approach was also clear in the workshops we have designed. For instance, our last workshop titled: “Shared discussion about different expression mechanisms in theatre and dance performances” targeted young males and females who didn’t have previous professional knowledge about dramatic arts. This activity aimed to build a bridge between performer’s and spectator’s bodies. To achieve that goal participants were involved in physical exercises that helped them understand more about choreography, and how artist design their body movements to tell stories or express feelings. In the second half of the workshop participants tried to design simple body movements on their own, based on their personal stories.

It was really touching for us to watch the positive effect of this small activities on people’s relations with their personal bodies, the trainers’ bodies, or the bodies of other participants in the workshop. We also received a very emotional and encouraging feedback in the final evaluation of this particular workshop. I will always remember the words of a young mother who said that this workshop helped her reconnecting with her body. Back home, she noticed that she had resumed one of her old habits of dancing in front of the mirror. While another participant said: “For a long time, I had this feeling that my body was moving on its own, but this workshop helped me to control my body and to be aware of this movement again”.

I guess there were some both good and bad surprises along the way, one of the good ones was the fact that a lot of people showed up to witness our closing ceremony and to discuss with us the accomplished academic paper, we were so delighted to receive serious feedback and honest criticism of our work that will surely help us improve our paper.
On the other hand, it was disappointing for us to notice that only a few of the actual workers in the field of theatre and dance were among the audience members. In fact, only 2 from the 11 specialists we had interviewed managed to attend this event. We had the impression that there was some sort of negative attitude toward our aspect of focusing on the audience, some of the interviewees expressed their opinion by saying that it’s not a priority for them to think about the audience while most of their efforts is on managing to produce a theatrical performance in the first place.

What impact did you generate?

I guess that the final delivery of the project is close to what we had in mind. But in spite of that, we hoped to have the opportunity to work in a freer atmosphere, where we can promote our work in the way we desire, and engage more people from more isolated communities inside Syria.

Currently, we are examining the possibility of publishing a book based on our accomplished paper. Also, after a short break, we want to discover how we can to take advantages of the collected data, in new activities and initiatives. However, the sustainability of the project remains dependent on finding new partners to support and develop the concept of “trace project”.