Subscribe to our newsletter
I accept all terms and conditions
There was an error, please try again later
Thank you for subscribing!
Courageous Citizens: Framer Framed Back
Support us

We continue our series of interviews with our Courageous Citizens grantees with Framer Framed. They are an Amsterdam based platform for contemporary art, visual culture, and critical theory and practice.

Together with Netwerk Democratie and our Tunisian partners Spring to Come and Jasmine Foundation, Framer Framed wanted to explore and reflect on the design of public space from a feminist perspective with young women. The findings and ideas of the participants were artistically expressed and by the end of the project they collectively curated their own exhibition. From the beginning, we decided to focus on young women in Amsterdam and Ben Arous (an agglomeration of Tunis) and facilitate the exchange of knowledge and experiences between both cities. We were curious to learn how young women living in these urban areas experience public spaces and to what degree they feel ownership over it. 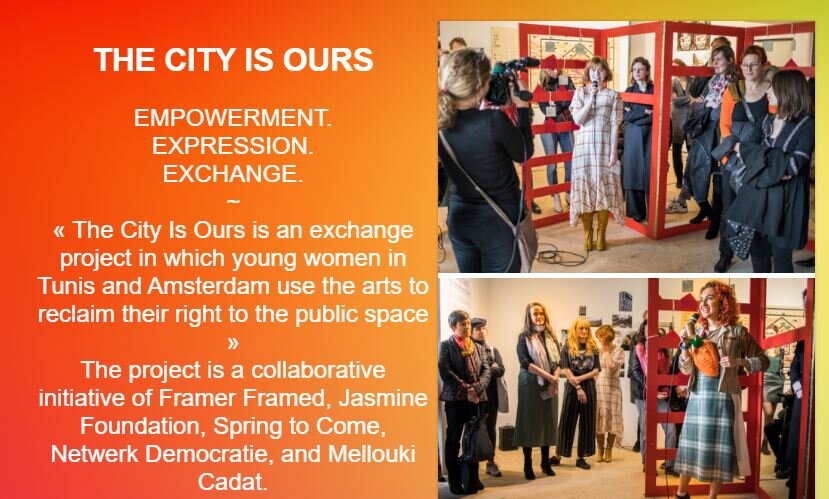 What caused our curiosity was a research that Framer Framed conducted in collaboration with the University of Amsterdam in the neighbourhood Molenwijk (Amsterdam-Noord). This research showed that, in comparison to their male peers, very few young women in Molenwijk spend their leisure time in public spaces. Through a series of workshops we wanted women in Amsterdam and Tunis to feel ownership of the public space (again). The workshops were led by artists, activists and scientists from different regions of the world and led up to a co-curated exhibition that opened on the 8th of March, International Women’s Day. Through this, participants came into contact with methods to shape democratic processes, experience the potential of socially engaged art, think about identity and exchange their experiences and ideas with young feminists in Amsterdam and Tunis.

It was inspiring to find commonalities during the We Make Places workshops with our host organisations and what Framer Framed aspires to do in our project space Werkplaats Molenwijk: connecting with local communities through art while being critical towards the process of gentrification. Although their approach and goals are different in many aspects, it was still possible to relate to their practice and meeting them allowed me to learn from their experiences.

Furthermore, having to talk about our project plan to an audience who all have very different backgrounds, created awareness of the jargon and academic terminology we initially used. The fact that the concept did not directly resonate with the participants at We Make Places, suggested that we would need to talk about our topic in a different manner to future participants of The City is Ours as well.

International partnerships were at the heart of our project plan, and Framer Framed had experience with this. But still cultural and organisational differences between the four collaborating partners in our project caused all to invest more time in coordinating the project than we had anticipated. Both life schedules and language barriers proved to be a challenge for real time conversations. We solved these issues by recording videoblogs in which the girls could ask each other questions and posted these on our Tumblr page. This gave the girls the opportunity to prepare their questions and answers in their own time and worked really well.

Another obstacle was the recruitment process. In the end we had to come up with guerrilla tactics to recruit our participants and spend a whole lot more time on the recruitment than we anticipated but it worked out very well and the young women participating were very motivated. We’ve contacted schools, community leaders and other people who work with our target group and we visited schools to pitch the project. 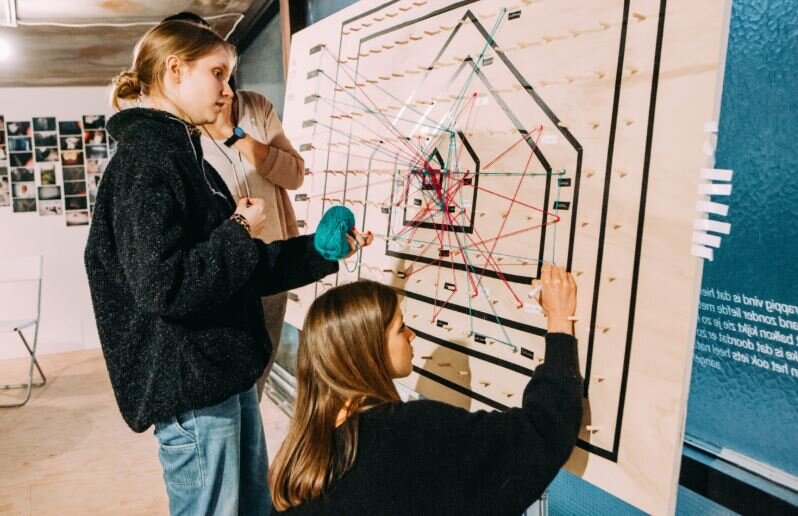 Participants during a workshop with architect Laura Alvarez, photo by Dalal el Ouariachi

Thanks to everyone’s dedication to the project and perseverance during the process, we managed to overcome difficulties and successfully complete the project and created an enthusiastic community.

As in all projects successful moments confirm you in your belief you are doing the right thing. What was yours?

When we started we had agreements with schools and the recruitment process would be an easy task. In the end this became a very intense process of finding every individual participant through the active approach of key figures in our network. Our Tunisian partner did not experience any difficulties with regards to recruitment. They already worked with a loyal community of young women. The surprise was that we found that having young women participate extracurricular and signing up individually, resulted in an extremely motivated and engaged group.

What impact did you generate?

The level of sense of community amongst the participants both in Tunis and in Amsterdam exceeded our expectation. It was very important to hear from them that they experienced the workshops as a safe space where they could freely share experiences, ideas and doubts. Among them where a few girls that had already developed an activist attitude. Through peer-to-peer learning they inspired other participants, to whom the topics were fairly new, to develop a more critical perspective on the world they live in. Some participants even discovered their ambition to become a person of influence.

For the Tunisian partners this project reaffirmed their community and caused a lot of engagement with the local community especially during the festive opening event on International Women’s Day which attracted people living in the neighbourhood.

In Amsterdam representatives of the municipality where present during the exhibition opening on International Women’s Day. Amongst them was Erna Berends (representing the city in Amsterdam-Noord) who was one of the guest speakers at the opening. All representatives articulated that the input of young women is very valuable to policymakers. They showed appreciation for their views and great interest in the project and wanted to stay updated on the aftermath.

By the end of the project Framer Framed started exploring a next chapter for The City is Ours with Amsterdam based partner organisation TAAK – a collective that initiates art projects in the public domain and develops and creates commissioned art projects. In this next chapter of the project the participants will work together with an artist of their choice and use the knowledge they have gathered during the The City is Ours workshops to create an artwork in the public space of the Molenwijk. Both Framer Framed and the Amsterdam based participants of The City is Ours are very excited about the idea that they will continue working on their vision of the public space.