We portray our Culture of Solidarity Fund grantees in a series of stories. The grantee featured here successfully applied to round 5: Cultural grant for regional transformation, which we jointly ran with the Bundeszentrale für Politische Bildung.

The project takes the Erasmus program as a model by bringing together young people from different nations and social backgrounds: 48 teenagers from Germany, Poland and France face the challenge of trekking from Drawno in Poland’s West Pomerania district to Templin in Germany’s Uckermark region by foot, bike and canoe. Multinational teams of 16 youngsters aged 14 to 17 work together to master the big and small challenges confronting them on their two-week journey through the “wilderness”.

Following the disruptions of the coronavirus pandemic, the adolescents involved in this programme can now experience everyday pan-European life once again and strengthen their awareness of what can be achieved when people work together.

Since 2018, Summer Camp “Weimar Triangle” has been a binational project with German and Polish youngsters.

“Now, since the Coronavirus pandemic, which was a little gap for us as a school project, we want to restart the project with a new perspective. Together with the German, Polish and French perspectives, we want the youngsters from these three nations to be together for 14 days to leave their so-called comfort zone and adjust to the challenges that they are confronted with by meeting people they would never have met and dealt with problems they probably wouldn’t have imagined before to adjust to the challenges they are confronted with.” expresses Ferdinand von Saint André

However, over the last few years, the pandemic has made it harder to travel, and now Europe faces an enormous challenge due to Putin’s invasion of Ukraine. Ferdinand von Saint André further explains what this means for Summer Camp “Weimar Triangle” and this idea of European integration. 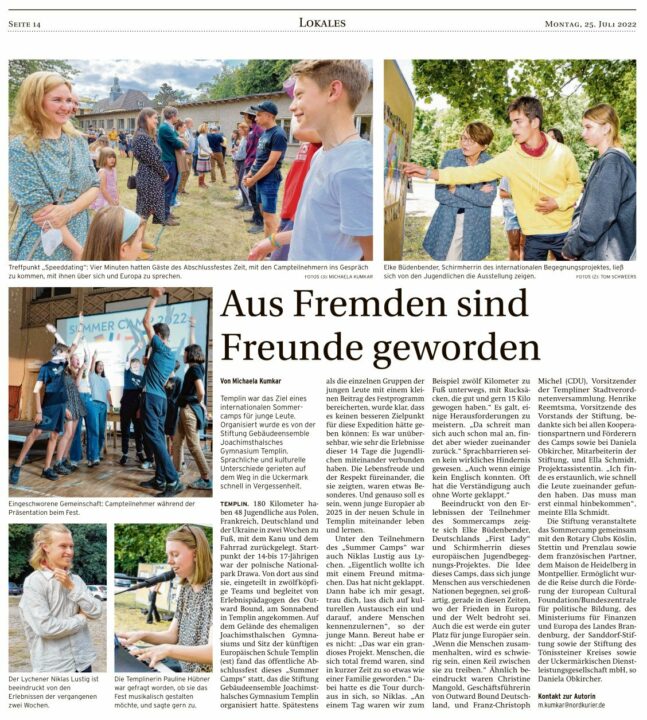 “The current war in Ukraine brings forward the idea of European integration and the core idea to end wars between the countries of Europe and to find a way of living together compromises of words and not weapons. So I believe the core idea of European integration is very much on the table right now, and it’s good to see the reaction of not only the EU but also all European countries to stand together and also be much more aware of what are the values that build the idea of being European.

Also, we must have European solidarity to be ready to stand in for one’s ideals and values. This is another reason for our project is to build European solidarity as our project was founded when the Brexit vote was announced, and it was declared that Britain would leave the EU, and currently, with the war in Europe, this is strengthening what we are doing to have a European project. Bringing youngsters together for 14 days allows for them to have much more of a European perspective that will carry on beyond the project and allows them to create a network. ”

Our long-term goal with this project is to enable relationships and bring people together who would have never met to create a European sphere that will last longer than the project itself. So it’s really about creating networks that allow that who participated in Summer Camp to have a more European perspective.

This project has also successfully applied to our Culture of Solidarity Fund: Ukraine edition and is now inviting young Ukrainian refugees to participate in their camp.