Subscribe to our newsletter
I accept all terms and conditions
There was an error, please try again later
Thank you for subscribing!
On questions of mobility, matters of belonging and our perception of public space Back
Support us

On questions of mobility, matters of belonging and our perception of public space

It might be the first time in the history of European Cultural Foundation that we granted a soundwalking festival. In a conversation with the co-founder of the Walking Festival of Sound, Jacek Smolicki it soon becomes clear that it actually is a very logical thing to do. “Walking touches on questions of mobility, matters of belonging and our perception of public space, and sound can only add important layers to it.”

Jacek, himself a soundwalker and researcher, and Tim Shaw the other co-founder who is a sound artist and lecturer, have only organized two editions of the festival yet, in Stockholm and Newcastle which are their respective cities of residence. It proved to be a success – in audience participation as in discovering new modalities around walking and listening. “Besides uniting artist-walker communities, architects, sound engineers we also wanted to host events that would offer something to local residents. The events did not have any strictly imposed theme. We were interested in providing space for very diverse projects and the themes and points of intersection emerged rather through discussions after or during the soundwalks. So we talked about mobility in the cities, how the built environment enables and prevents it, we explored contested and hidden histories. For the edition that we are currently planning in Krakow there are many historical layers that continuously lend themselves to be attentively walked through and critically reflected on, also through listening to their echoes, still reverberating and haunting the city. There is the time of the German nazi occupation, the communist past, the period when I was born when society lived under the martial law. I am not even reaching further back than 80 years. In other words, there are deep historical sediments that one can work by the means of sound and walking. Being interested in experimental formats, we also include and make room for more traditional guided tours. For example in Newcastle we had a walk guided by the Modernist Society around architectural changes to the city that brought about new kinds of dynamics, also in terms of soundscapes. In both Stockholm and Newcastle we also had artists present their work through minimalist, silent walks alongside more technologically complex ones creatively utilizing various microphones and wireless headphones. In short, we attend to the multiplicity of walking and listening modalities while sticking to the core interest which is to explore and reveal what exists in those places but is not often that easily perceptible.”

In times of rapid changes – and many people would say that spring and summer 2020 are such times with the Corona pandemic and the global wave of anti-racist demonstrations “material infrastructures are slow to adapt to rapid changes in opinions, worldviews, and new sets of behaviors and practices that accompany them. But the perception of the public space can be altered very rapidly, and the dynamics of mobility and accessibility in public spaces can be all of a sudden questioned at political, economical and environmental levels. Those are the layers we would like to touch upon while walking and listening during the festivals to come. To do so, we will work with local communities who are aware of such sensitivities and can sense these quivering alterations below the surface level.” Jacek quotes Zygmunt Bauman who wrote about the difference between the pilgrim and the tourist; the former one seeking to lose identity in an endless geography, and the latter to reconfirm his or her desired identity in a series of well fixated geographies. “Walking while listening is an amazing tool of reaching beyond and, perhaps, destabilizing one’s perception of that fixated geography, in time, physically and mentally.”

It was in 2010 when Jacek actually experienced this. During a summer school he was teaching in Jerusalem he could hear how various layers of the city were sonically overlapping, but how he could only manoeuvre in one: his walking was choreographed by security measures. The sounds of loudspeakers, megaphones, and voices could cross the divides between West and East Jerusalem though. “Here were powers at play that wanted to decide what I could experience, and other powers that wanted to subvert those rules. I wanted to find out what those sounds meant, what they symbolized and where they were coming from. In short, my time in Jerusalem got me started on reflecting on the relations between walking and listening, on their transversal ability of sound to move beyond that which is heard now, and to start seeing it as a gateway into the past and future.” 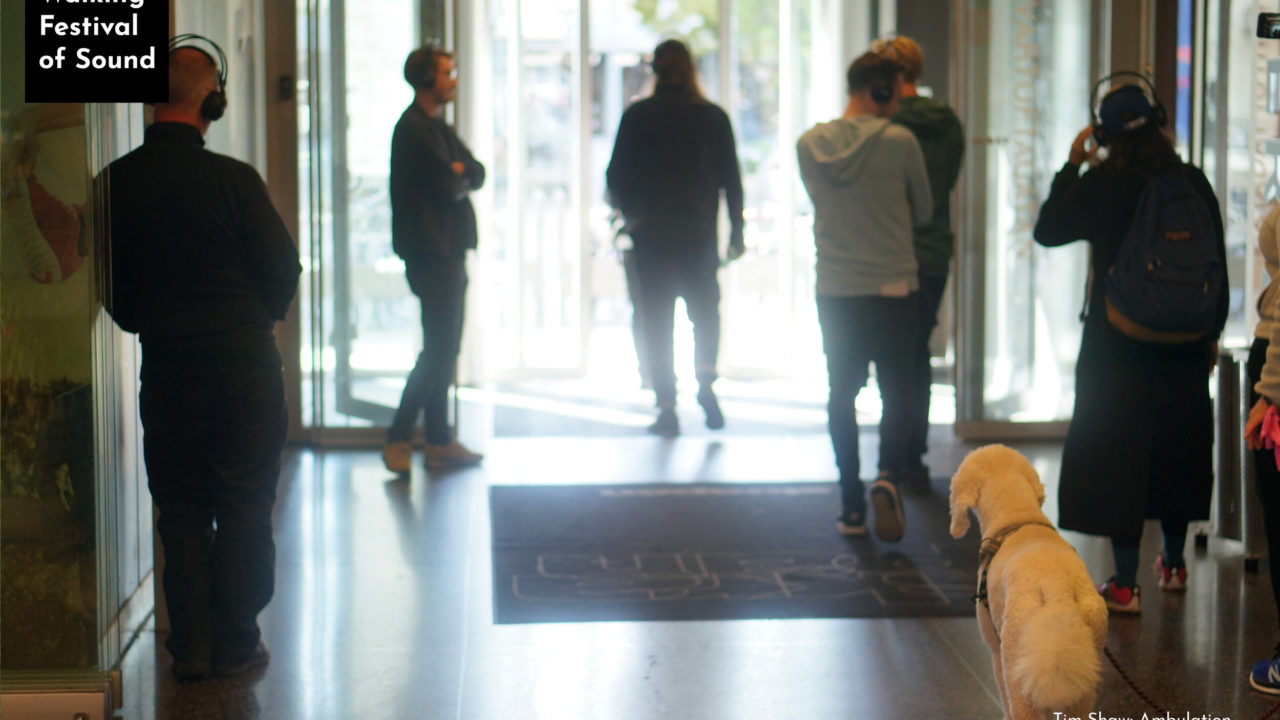 Walking is not only an act of moving from place A to place B, but can become an act of building solidarity. Similarly, listening is not only about paying attention to the sound A or B, but also an act of paying attention to that very act of listening and understanding various ways or dialects through which we listen to spaces and each other. Navigating through public spaces, even if one does not intend so initially, is always a way of discovering and experiencing power relations, “think of the motorization of our cities, or the rise in gated communities, both at once enabling some and disabling others to go places. Walking and listening together with someone next to you always brings you closer to that person.” It could be one of the reasons people might want to join the Walking Festival of Sound: to feel included in and actively contribute to a temporary micro-society while the society at large keeps struggling with the crisis.

Then of course, why Edinburgh and Krakow? “Edinburgh is almost home to Tim, and Krakow is my birth place, we thought that was reason enough. However, these two are twin cities, which is what really made us work with them. Twin cities is a concept that emerged right after WWII, before the EU was officially formed, to support bilateral, small-scale collaboration. We believe that today’s Europe needs to return to such micro-collaborations. Europe should be full of those. And soundwalking in twin cities could be a good opportunity to start from that micro-level to move, perhaps, to thinking of a new vision for Europe at large”.