Subscribe to our newsletter
I accept all terms and conditions
There was an error, please try again later
Thank you for subscribing!
Cities of change Back
Support us 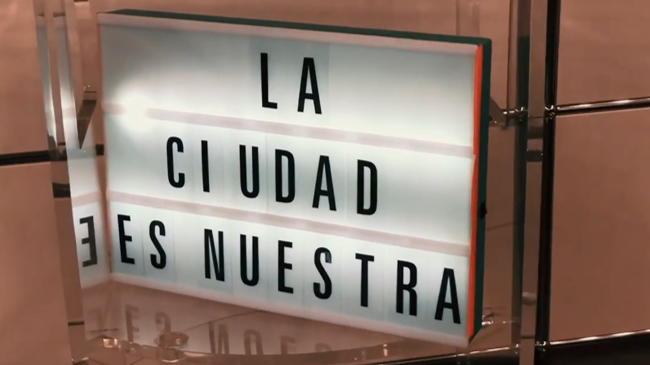 We can hear metal clanging produced by the construction site banging in the back of our heads even if we don’t have a construction site nearby. We have all been exposed to development, living at the heart of emerging power disbalance, unfavourable environmental impact, as well as social, political and cultural state of shock for the local community. Urban changes often lack local participation and involvement under the swing of a new commercial development, often resulting in harsh evictions or forced migrations due to progressive rise of prices of our up-until-then native habitus of local citizens.

Practicing the right to the city, claiming ownership of the societal transformation and making bold moves emerges as a daily necessity for any citizen faced with everyday life challenges of ongoing modernization or transformation in their living surrounding. We see this in, for example, rise of tourism, repurposing of old (public) properties through privatizations, in reconstruction of public surfaces, transportation, struggles with housing and the overall inequalities contributing to greater distancing between people, creating alienation, isolation, or in extreme cases even social unrests accompanied with power disbalances. With increased migrations, how are we creating inclusive environments where upcoming challenges are thought-through with mitigation measures in place and responsive media to complement decision-making? We start answering this question by looking at what is happening.

While developed west world like Australian continent gets consumed by wildfires and cities suffocate in smoke and ash flakes falling from the sky that are not so unknown in Europe (only on a smaller scale), simultaneously Adriatic costal cities from Venice to Split were drowning in floods. Dystopian future of a collapsing civilization is already unfolding before our eyes if we are brave enough to stare at it directly. Intergenerational worldviews are with vast gaps in which younger generations keep confronting with their own bubbles of high social media exposure.

MediActivism project that the European Cultural Foundation implements with Krytyka Polityczna from Warsaw, Zemos98 from Seville, Fanzingo from Botkyrka municipality near Stockholm, Kurziv from Zagreb and Les Tetes de L’Art from Marseille, we build new community practices for a more resilient Europe. In the first year of the project we organized hackcamps with the methodology and intervention framework which allowed young people in each of the five cities to gather, expand their worldviews and reflect on problems in urban environments. We got astonishingly different results on the issues that matter in each city, considering how to advance inclusive media agenda and create critical social pressures and opportunities for new decision-making forms. 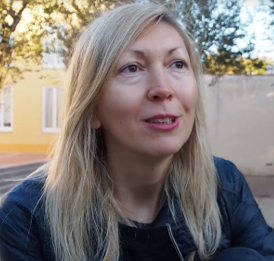 Our partner Les Tetes de l’Art produced an interview with Teja Rota, a Slovenian urban designer who participated in the Seville hackcamp organized by Zemos98 with young people from Spain, in which Teja states: “All this social disparity can be related because it is happening everywhere around the world. (…) Communities are not working towards the common goal (..) and developers are determining everything for people and this does not necessarily apply to their needs and expectations.” Check the whole interview here.

In Sweden, our partner Fanzingo has an ongoing collaboration with the Botkyrka municipality authorities on enabling young people to get their first employment by working on the programs of this organization, mainly in participatory media creation. Our Swedish partners have decided to hack the hackcamp format an enable young people in their community to engage in a 3-month media literacy education activity that resulted in building prototypes of media content to be worked on further in the Right to The City Labs that will take place in 2020. Check here three prototypes created in the form of interviews with local activists on the housing and their take on the right to the city issues. 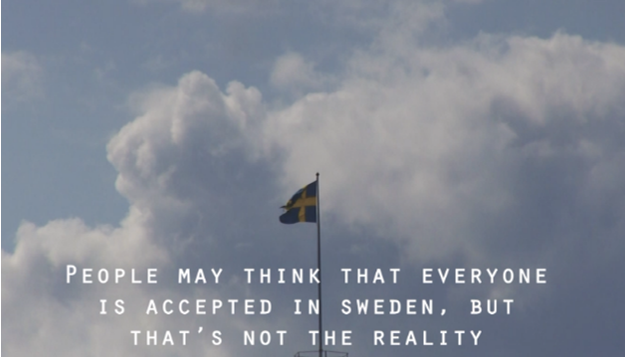 A screenshot from short documentary movie “Contrast” created by a group of 16, 17 and 18 years old Therese Ackeberg, Dante Heinonen Pinto, Mathilda Nilsson and Samuel Vågstrand. These young people didn’t know each other before and some of them never had any prior media production experience. Today, we can show you only a screenshot because their work is under consideration for a premier screening at a film festival.

In hacking the complexity of right the city issues, we often see new language emerge to portray the issues that we deal with like GENTRIFICATION, TOURISTIFICATION, RENOVICTION, LABELISATION, PRIVATISATION, FESTIVALISATION, BEATUFICATION, CHURCHIFICATION. As our associate Charlie Tims noticed during the Hackcamp in Marseille organized by Les Tetes de L’Art: “Is hacking of narratives that reinforce displacement a valuable strategy? Someone just asked this question. Many of the projects in this and the last Hack Camp have satirised and subverted the language of city branding. Does this really challenge the power of developers/city governments, or will it just provoke them to work with other agencies and designers to establish the same narratives in new ways?” and “How does the value of local culture / of improved public space / a renovated building / community organization stay with local people? Marseille clearly needs to change, but everyone here worries that these changes will fuel different forms of displacement.”. Engaging decision-makers to look for ways how to address urban challenges that put citizens’needs first is one of the biggest priorities with media content produced by citizens and activists themselves. 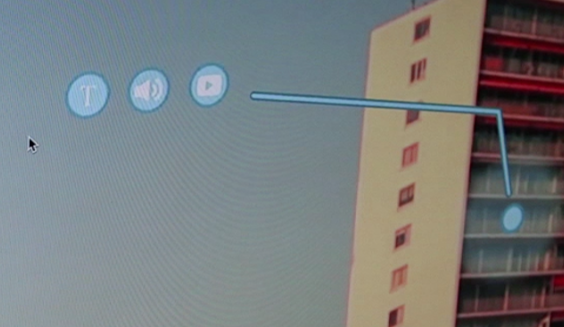 During the Marseille Hackcamp, a local Tabasco Video Association, presented their FRIGG project – an app ecosystem that allows interactive and localized gamification and storytelling.

If one lives a sustainable lifestyle, it’s not easy to take a holiday. Making a decision on how to engage with a constantly changing world, we are always bound with how are own environments look like. That is why in Warsaw, the hack camp was focused on climate catastrophe and high levels of smog, questioning how cities contribute to climate change with changing green with concrete surfaces as part of the modernization process. Outcomes from the working groups organized by Krytyka Polityczna were mainly centered around individual learning, impactful viral intervention, and simple methods to empower masses to participate, as demonstrated by Lora from Poland in this video. 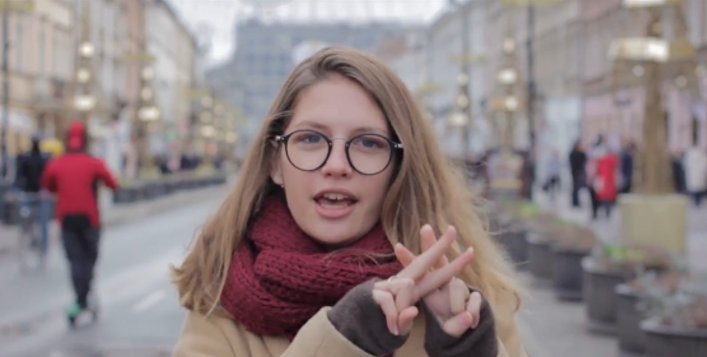 Our discussions during the hack camp in Zagreb organized by Kurziv in partnership with Kulturpunkt and PravoNaGrad offered insights into how city authorities turn the core center into a continuous festival site to attract visitors and toursists while neglecting local policy priorities and with corruptive practices, help profits from the Christmas market in public spaces end up in pockets of few private companies, endorsed by political ruling power. Also the renovation of the Zagreb Fair into a residential repurposing rasies concerns of further exploitation of public benefits for private interests. So before these practices explode in local political environments, our MediActivists discuss them to decrease social clashes uprising, claiming the right to the city as a model of development more orientated to the needs of the city’s residents rather than corrosive and corruptive practices.

Stay tuned for our Right to the City Labs which will take place across Europe in 2020 and do follow us on insta: rightothecity, twitter: rightothecity and we will soon launch a new project website at www.mediactivism.eu.

Check out this video for more on the MediaActivism Hackcamp. 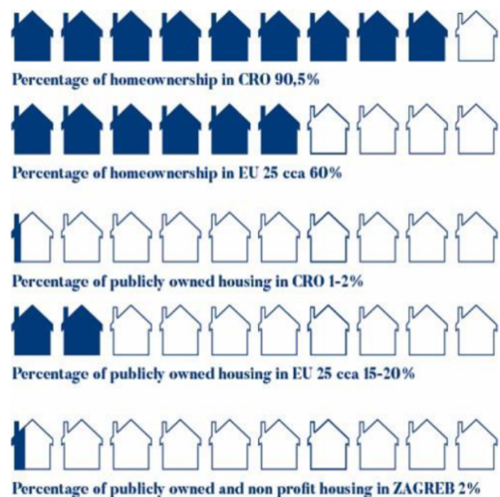 Comparative figure of ownership structure in in Croatia and EU. Graphic: Iva Marcetic