We met Annelotte de Graaf / Amber Arcades on a greyish winter day in December to talk about her record “European Heartbreak” and the future of Europe, with the elections of May 2019 slowly appearing on the horizon. But it turned out the latter were a surprise for her: “Wow. I didn’t know about them. While it is a very important thing to know, but as you know Europe is not very present in media. I hope the elections will stimulate people to reflect on the European Union and what it could be. That is needed. But phew, can you imagine I didn’t know? I have studied law for seven years, I work at the Dutch immigration service, and even I didn’t know.”

Why is it needed people reflect on the European Union? “Well, with populist parties gaining ground in many European countries the idea of “our culture first” threatens cooperation, and for me the European Union means cooperation. My studies included European law and so I actually should know all the differences between the institutions, the roles they play and so on, but I forgot most boring details and just remembered “cooperation”.

“My record European Heartbreak is complementary: What does it mean to be European? While I was recording the songs in the USA I would see ten American flags during the short walk from bed to studio. It is their way of self-identification, but we don’t do this in Europe. It made me feel very European over there, and I wondered if ‘EU building’ could work. Especially as we Europeans seem to be old cynical men compared to the adolescent USA.”

“But my record is not only about Europe, it is a collection of songs on stories that are cut off, on stories that seem displaced between past and future. That is something we can all recognise, on individual basis and also on the level of societies. And as humans do; then we start looking for a new way of telling our story, of redefining the links between past and future.”“Because we need stories to give sense. In the beginning of a new love we don’t need it – but once the raging fire has made way for the pilot flame we start wondering ‘what’s in it for me?’ Some people are that question cynically and only look at economical value, but for Europe I would say democracy is in it for me.”

“And no, my record is not intended as relation therapy for Europe. That would make no sense, the only thing I could say would be: ‘Look how far we have come. Europe – with all its’ little countries – has been exchanging for thousands of years and it will continue doing so, but the construct of the EU makes it easier, and it gives us geopolitical power. Not that the EU will ever be finished, because as long as humans construct it, it will be subject of change.’ That indeed makes ‘EU building’ harder, contrary to American nation building, but it fits with the European views on growth and decline. Naturally, this doesn’t exclude that learning about the history of the EU, of how it functions, of what EU bodies do, should be part of education.”

“That might also help in battling some of the generalisations which go around on the EU, and Fortress Europe. I am not an avid newspaper reader, but in my job I encounter and need to judge stories of people fleeing to Europe everyday. When I am listening to stories of women coming from Syria or Eritrea I really wonder how some people can label refugees as profiteers. Their life stories are the best examples of stories cut off; their lives examples of being displaced in between past and future. Maybe some of these refugees should be the relation therapists for the European Union.” 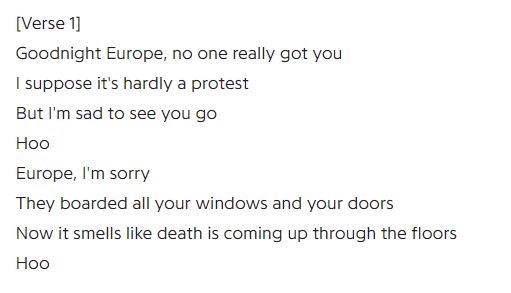