Subscribe to our newsletter
I accept all terms and conditions
There was an error, please try again later
Thank you for subscribing!
A Cultural Deal for Europe – A central place for culture in the EU’s post-pandemic future Back
Support us 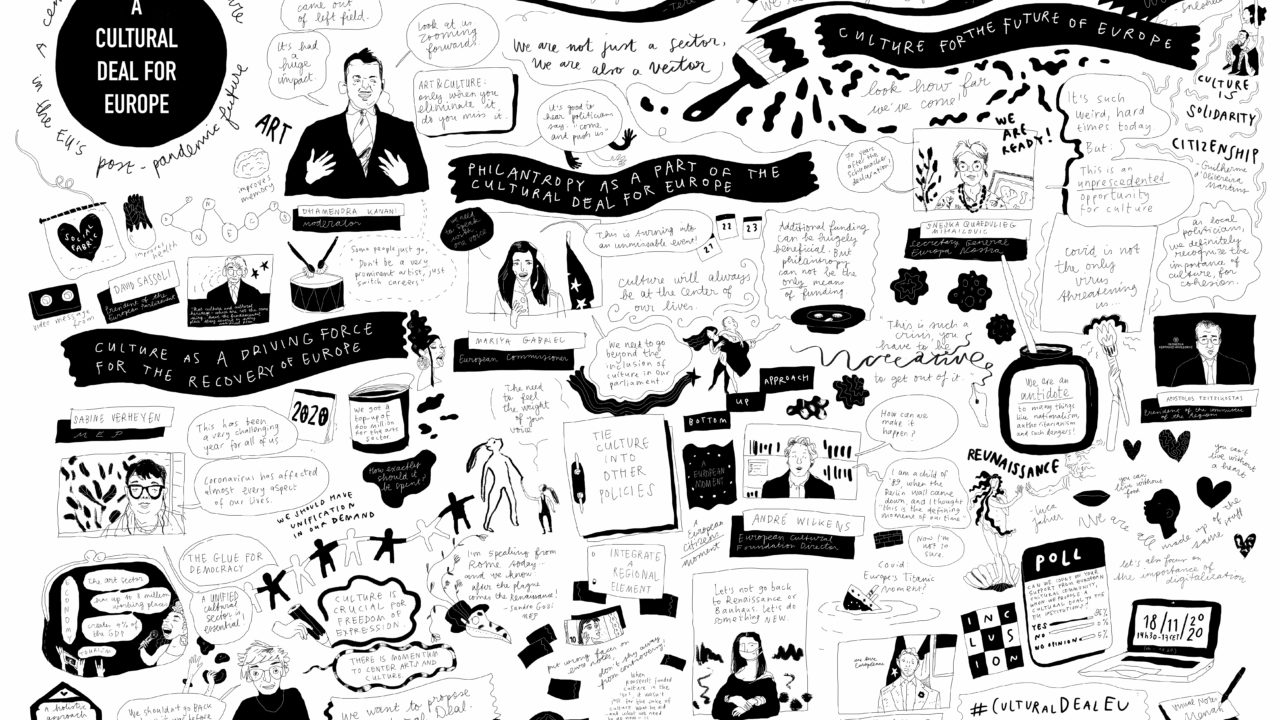 A Cultural Deal for Europe: A central place for culture in the EU’s post-pandemic future

The online debate reflected on critical questions about the role of culture for Europe’s recovery from the COVID-19 pandemic and, more widely, for the future of Europe, involving the European Commissioner in charge of Innovation, Research, Culture, Education and Youth Mariya Gabriel, the European Parliament CULT Committee Chair Sabine Verheyen, the French Secretary of State for European Affairs Clément Beaune, as well as other MEPs, representatives of Member States and of other European institutions, as well as a broad range of stakeholders and civil society actors. A video contribution by the President of the European Parliament, David Sassoli opened the meeting, and the conclusions were made by the President of the Committee of the Regions Apostolos Tzitzikostas.

The debate was moderated by Dharmendra Kanani (Friends of Europe).
Visual storytelling was provided by the artist Menah (Marleen Wellen).

The online debate was organised around three key thematic chapters:

After each chapter, the audience had the chance to take part in an online discussion with policymakers and various stakeholders from cultural, creative and heritage sectors, foundations and civil society.

15h05 A Cultural Deal as an opportunity to create a tangible multiannual perspective for strong cultural dimension and policies at EU level. Building the understanding of the vital role of culture for Europe.

15h42 Chapter 2: “Philanthropy as a part of the Cultural Deal for Europe”
Philanthropic sector’s contribution to Arts & Culture in Europe is significant and goes beyond the financial support. Exploring new models for public-philanthropic partnership for culture in Europe, could leverage resources and create new opportunities

16h50 Conclusions by moderator and final words by MEP Sabine Verheyen and the organisers.
17h00 End of the debate

Registration is now closed. If you registered, but did not receive your zoom inlog link, click here.